Leave a comment Posted by Jonathan Pappalardo on May 17, 2017 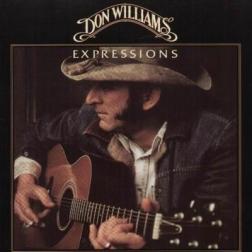 Don Williams released his eighth album, Expressions, in August 1978. He co-produced the album, once again, with Garth Fundis.

Expressions contains three of Williams’ most iconic singles. “Tulsa Time,” written by Danny Flowers, is a honky-tonk barnburner that took Williams out of his signature sound with ease and sophistication. He was back in his comfort zone for the beautiful self-penned “Lay Down Beside Me,” one of his most beloved ballads. The final single, Bob McDill’s “It Must Be Love” was another gorgeous uptempo number. “Tulsa Time” and “It Must Be Love” hit #1 while “Lay Down Beside Me” peaked at #3.

The singles each have versions by other artists. Eric Clapton and Pistol Annies both have versions of “Tulsa Time” and Alan Jackson brought “It Must Be Love” back to #1 in 2000. Kenny Rogers lent his voice to “Lay Down Beside Me,” as did Alison Krauss, in an ill-advised duet with rock singer John Waite.

“I Would Like to See You Again” is a lovely mid-tempo ballad accented beautifully with gentle mandolin flourishes. “You’ve Got a Hold on Me,” about a love gone by, is an AC-leaning mid-tempo number with nice accents of steel.

“Tears of the Lonely” is a lush ballad with striking piano and ear-catching percussion. “All I’m Missing Is You” picks up the tempo nicely and tells the story of a guy who does the things he used to do with an old love, missing her all-the-while. “Give It to Me” is a nice, lush song about love. He showcases his exceptional talents as a vocalist on the masterful “When I’m With You,” one of the strongest of the album’s ten songs.

Expressions captures a master at the height of their prowess when the artistic and the commercial are in near perfect balance. He also won his only industry awards as a result of this album – CMA Male Vocalist of the Year (1978) and ACM Single Record of the Year (“Tulsa Time,” 1979).

Expressions is as close to a flawless album as I’ve ever heard, from an artist who has never hit a sour note in his career. It’s just an exceptional record through and through.