Album Review: Sawyer Brown – ‘The Boys Are Back’ 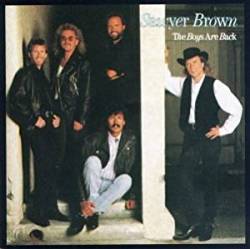 The neotraditional revival and the rise of the Class of 1989 might have put paid to the career of Sawyer Brown, as they did those of many of their contemporaries, but instead 1989 was to see Sawyer Brown reinventing themselves. They had had bigger radio hits before, but their energetic and credible cover of the George Jones hit ‘The Race Is On’ showed a new side to the band. It was a #5 hit.

The to follow ups were less successful, languishing in the 30s. ‘Did It For Love’ probably deserved better; it’s an engagingly delivered com-pendium story song about life choices – getting married, single motherhpood and volunteering to fight in Vietnam. The lyrics are awkwardly phrased and in places meaningless (“It was the rage of the age and the hour of the main attraction”), but the earnest vocal and catchy tune sell it. ‘Puttin’ The Dark Back Into The Night’, another catchy story song, is less effective, with rather intrusive percussion.

A cover of Steve Earle’s blue-collar ‘Getting’ Tough (Good Ol’ Boy)’ suits Miller’s voice very well, and this is a real highlight, second only to ‘The Race Is On’. The very best track, though, is the closing ‘Passin’ TRain’, a gently reflective tune written by the band’s keyboard player Gregg Hubbard. Frustratingly, it appears to be missing from the iTunes version of the album.

‘Good While It Lasted’ is a pleasant MOR ballad, and ‘I’m Gonna Miss You After All’ a fair country one, but neither will stick in the memory very long. The mid paced ‘Rosie Knows’ is okay, and I quite enjoyed the country rocker ‘Hey Hey’ despite a disposable lyric. The train themed ‘Locomotive’ is boring. ‘The Heartland’ has some nice traces of fiddle, but the song itself is dull.

Overall, their sound was staring to be gritter and less polished, but Mark Miller’s songwriting was still a work in progress (at least lyrically). They were improving, but still not quite there yet.

One response to “Album Review: Sawyer Brown – ‘The Boys Are Back’”