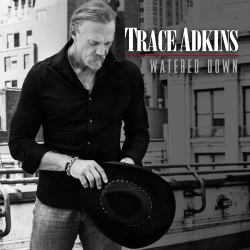 The term “watered down” is usually used in a pejorative sense in the country music world. It’s generally used to refer to music that has been stripped of its country elements in favor of a more MOR sound that will appeal to a wider audience, but as the title of Trace Adkins’ new single, it seems to suggest a creative renaissance of sorts.

It’s been six years since Trace last had a single in the Top 10 and nine years since his last number one. During that time period country music saw the rise and (hopefully) fall of Bro-country and a lot of other changes that many of us were not happy about. Trace himself bears some responsibility for the genre’s wrong turn, given some of his own questionable musical choices in recent years. It’s nice to see that he is apparently trying to make amends for that with his latest effort. Written by Matt Jenkins, Trevor Rose and Shane McAnally, “Watered Down” is a ballad that finds Trace acknowledging middle age, without wistfulness, regrets or nostalgia. The production is contemporary — heavily dependent on keyboards and a subtle string section — but it is never heavy-handed. He’s well aware that he is no longer a young man, but he’s not quite ready to retire to a life of golf at The Villages just yet:

Unless I’m reading too much into this, the song seems to be a metaphor for Trace’s career. It’s very possible that he’ll never again have a big radio hit, but he seems content to settle into a new role as one of country music’s elder statesmen. He’s not going to try to maintain the hectic pace of his younger years, but he’s still going to stick around and make music on his own terms. And if “Watered Down” is an indication of the path he’s planning to take from now on, I very much look forward to following him on his journey.