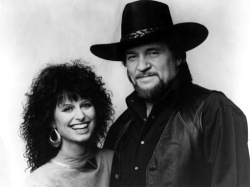 There currently isn’t much available by this duo, and they did not record much together since their voices really didn’t blend all that well.

Leather & Lace was issued on vinyl & cassette by RCA in February 1981 and features the following ten songs:

All American Country was issued on CD by BMG in 2003 and features the following ten songs:

All American County has the four duets on Leather & Lace plus “Suspicious Minds”, “Under Your Spell Again” and “Sight For Sore Eyes” are duets, meaning that the modern era CD is the better collection if you are looking for actual duets. This CD is still readily available, whereas Leather & Lace has been out of print for a long time.

Truthfully, while I am a big Waylon Jennings fan, neither of these albums is particularly satisfactory. I would regard the best song (found on both albums) as “You Never Can Tell”, a Chuck Berry song from 1964. The solo efforts on Leather & Lace (especially the Waylon tracks) are throw-aways so I would give Leather & Lace a C. I would give All American Country a B for having more duets and better songs.