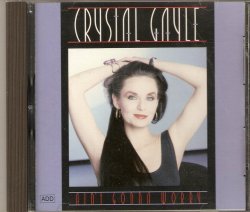 The rise of the New Traditionalists changed the face of commercial country music, with crossover artists like Crystal sidelined. Her final #1 hits came in 1986, and her last top 40 country song a couple of years later. Warner Brothers dropped her, but rival Capitol Records (just starting to benefit from the breakout of Garth Brooks, with whom Crystal shared a producer in Allen Reynolds) still saw commercial potential in her. Crystal’s brief tenure on Capitol resulted in this one album in 1990, which saw her drawing back a little from the overly sentimental and sometimes lifeless MOR material she had been recording through most of the 1980s.

‘Everybody’s Reaching Out For Someone’ is a very nice song, written by Allen Reynolds and Dickey Lee, with a pretty melody, a lovely vocal from Crystal and a tasteful arrangement. Despite its merits it was ignored by radio when released as Crystal’s first single for her new label. In other circumstances, it could easily have been a big hit.

An enjoyable upbeat remake of the pop/country oldie ‘Neverending Song Of Love’ with a bouncy accordion backing got marginally more attention, but she would never chart again. Also promoted as singles were ‘Just An Old Love’, a classy lost-love ballad with a string arrangement; and the semi-title track, ‘It Ain’t Gonna Worry My Mind’. Written by Crystal’s favourite writer Richard Leigh, it is a bluesy gospel-sounding tune set to a piano and string backing.

Three other songs are familiar from other versions. J D Souther’s ‘Faithless Love’ suits Crystal perfectly, as does ‘Once In A Very Blue Moon’, written by Pat Alger and Gene Levine, which had been Nanci Griffith’s first single and had also been cut by Dolly Parton. Alger also co-wrote ‘What He’s Doing Now’, this time with Garth Brooks. Brooks would have an enormous hit with this a few years later, as ‘What She’s Doing Now’. Crystal’s version is excellent.

I overlooked this album when it first came out but I enjoyed much more than I anticipated. Released at a different time I think it would have produced several big hits, and it’s well worth a listen.