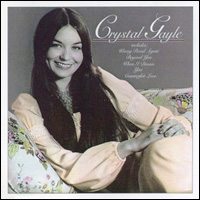 Crystal Gayle released her eponymous debut album in February 1975. The legendary Allen Reynolds produced the record, which was her first for United Artists. It peaked at #25.

The first single was “Wrong Road Again,” written by Reynolds. The short ballad is lyrically generic, but found significance sonically. The heavy orchestration was a sharp diversion from sounds typically associated with country music at the time. The gamble, which became a genre norm going forward, paid off – the song rose to #6.

She wouldn’t receive as a warm a reception with the album’s other two singles. “Beyond You,” which she co-wrote with Bill Gatzimos, is a gorgeous piano ballad that petered out at #27. The far more appealing, and a lot more country, “This Is My Year for Mexico” peaked at #21.

Reynolds also contributed “Loving You So Long Now,” an excellent guitar-driven mid-tempo number reminiscent of his work with Waylon Jennings. Gayle also shines on Paul Craft’s “Counterfeit Love (You Know I Got It),” a gentle uptempo number. Canadian Country Singer Ray Griff, who passed away earlier this year, wrote the jaunty and steel drenched “Gonna Lay Me Down Beside My Memories.” Singer/songwriter Marshall Chapman is behind the fantastic “A Woman’s Heart (Is A Handy Place To Be).”

I also love the ear-catching “Hands,” which may have a slightly cutesy lyric, boasts the strongest production work on the entire album. Crystal Gayle also features the first rendition of “When I Dream,” which Gayle would rerecord as the title track to her 1978 album. Issued as a single it would peak at #3. I much prefer the version found here, which finds the song in a more organic setting, with a nice cadence. Lush ballad “You,” written by Dolly Parton was the only song on the album not quite to my tastes.

As we know from Occasional Hope’s excellent review of I’ve Cried The Blue Right Out of My Eyes, these aren’t Gayle’s first recordings. Paul also pointed out United Artists issued three low-charting singles prior to the release of “Wrong Road Again,” her fourth single for the label. But these are the songs that saw Gayle as the artist she would become, her own woman, outside of her sister’s shadow. Reynolds has crafted an excellent showcase for her while simultaneously contributing to a changing landscape in country music (I always refer to as ‘slick country,’ although a more fitting moniker may exist) that wouldn’t be properly rectified for another decade. But it’s still a fabulous album, that nicely fits into the greater legacy of the genre.