Leave a comment Posted by Occasional Hope on December 12, 2016 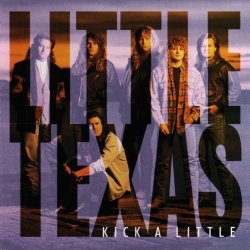 The band’s third album was released in 1994. The title track and first single is a country-rock styled tune urging assertiveness which was a top 5 hit. Performed with energy and sincerity, it is rather generic but pleasant enough. Although not their biggest hit, peaking at #4, the next single, ‘Amy’s Back In Austin’ may be Little Texas’s best remembered song, and in my opinion it is their best. An airy vocal sells the wistful story of a young couple whose romance and dreams have foundered. It was written by Brady Seals with Stephen Allen Davis.

Unfortunately for the guys, their momentum came to a juddering halt with the album’s third single, ‘Southern Grace’, an uninteresting ballad. It cannot have helped that joint lead singer Seals had left the band by this point.

In ‘A Night I’ll Never Remember’ the lovelorn protagonist looks forward to drinking away his troubles. It’s a pretty good song and might have been a more successful single. ‘Hit Country Song’ lists all the clichés of country hits but has an attractive and traditional sounding melody and arrangement. You can even hear a fiddle. It sounds lovely, and shows the band could have made a stab at a more traditional sound.

‘I’d Hold On To her’ is quite pleasant but ultimately forgettable. ‘Inside’ is an earnest AC/Hallmark style ballad about finding good in everyone. In ‘Your Days Are Numbered’ the protagonist warns a love rival that the girl has been crying on his shoulder; it’s well written and sung with conviction but the arrangement is bland and more AC than country.

‘She’s Cool’ is boring and over produced, while the closing Southern rocker ‘Redneck Like Me’ boasts clichés about rural Southern life. It was written by Jay Booker (who also wrote the much better ‘Sunday In The South’ for Shenandoah), and is the album’s only outside song, with the band (at least Porter Howell and Brady Seals) composing the rest of the material.

Generally the album is generally a glossily efficient example of 90s country-rock, with full bodied vocals and prominent electric guitar. It’s not quite my cup of tea, but is preferable to some of the extremes we’ve seen since.