Leave a comment Posted by Jonathan Pappalardo on November 9, 2016 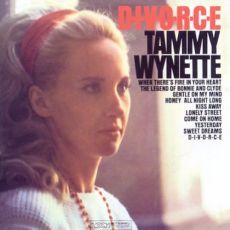 Tammy Wynette, once again, teamed with Billy Sherill for her third album, D-I-V-O-R-C-E, released in 1968. It would be Wynette’s first chart-topping album, fueled by the success of the now-classic title track.

The Bobby Braddock and Curly Putman penned ballad was Wynette’s fastest rising single to date and quickly topped the charts. She had gained a reputation for selecting material highlighting the woman’s perspective, a fascist sorely lacking in mainstream country music at the time. I first became familiar with the song through Rosanne Cash, who recorded a more contemporary take for Tammy Wynette Remembered following her death in 1998.

As was customary at the time, the album features a bevy of covers. Wynette turns in a rather strong rendition of “Gentle On My Mind” and a fantastic cover of “Honey,” which I’d never heard from a woman’s perspective before. I wasn’t as crazy about “Yesterday,” which with a country arrangement just doesn’t work. “The Legend of Bonnie and Clyde,” however, is one of the record’s strongest cuts. “Sweet Dreams,” on the other hand, is much too maudlin for my tastes.

D-I-V-O-R-C-E is the rare 1960s country album that hits all the right notes. The covers worked well with Wynette’s voice and I really liked the arrangements. If you haven’t heard this one before, I highly recommend seeking it out.