Album Review: John Prine and Friends – ‘For Better, Or Worse’ 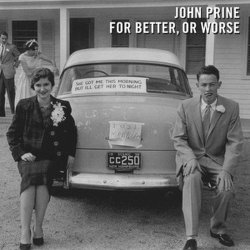 Back in 1999 singer-songwriter John Prine released a charming collaboration with a group of country and folk female singers, singing classic country duets. 17 years later here comes a sequel, which is just as delightful. Prine’s gruff vocals are set off by his duettist’s much better voices, and the combinations work very well.

Most of the collaborators are different, with the exception of Fiona Prine (John’s wife) and Iris De Ment. The latter featured on no less than four tracks on the first album, and two here, both originally recorded by Loretta Lynn and Ernest Tubb. The tongue in cheek opener ‘Who’s Gonna Take Your Garbage Out’ has Iris throwing out her good-for-nothing husband. He complains of being henpecked, while she declares,

They take a broken marriage more seriously in the sad ‘Mr And Mrs Used To Be’.

The wonderful Lee Ann Womack is ethereally sweet on ‘Storms Never Last’. She is even better on ‘Fifteen Years Ago’, a pained tale of long lasting heartbreak, which was a hit for Conway Twitty. Turning it into a duet transforms the song from one of solo heartache (a la ‘He Stopped Loving Her Today’, but with no end in sight) to one of mutual regret, which is almost more poignant. This is my favourite track.

‘Cold, Cold Heart’ doesn’t work as well as a duet lyrically, but the cut shows duet partner Miranda Lambert can do traditional country with a lovely sounding and emotional vocal. Kacey Musgraves hams it up a bit on the ultra-retro ‘Mental Cruelty’, but the track is fun. Holly Williams is good on the sassy back-and-forth of ‘I’m Telling You’, although the song is very short (less than two minutes).

The pure voice of Kathy Mattea makes two appearances. ‘Dreaming My Dreams With You’ is gorgeously tender and romantic, while ‘Remember Me’ is pretty with a little melancholy undertone. Alison Krauss guests on the gently pretty ‘Falling In Love Again’. Probably the least known singer to a general audience is Morgane Stapleton (wife of Chris), but I’ve loved her voice since she was briefly signed to a major label a decade ago. Her performance on Vince Gill’s ‘Look At Us’ is lovely, and very reminiscent of Lee Ann Womack.

A very pleasant surprise for me was Susan Tedeschi, a blues/rock singer who does an excellent job on ‘Color Of The Blues’. Although she’s not the greatest vocalist, Americana artist Amanda Shires is also decent on ‘Dim Lights, Thick Smoke’ (one of my favourite songs), and adds a bit of quirky personality.

It’s fair to say that Fiona Prine is not in the same class as the other ladies vocally, but her duet, ‘My Happiness’, is quite pleasant. There is one solo track, the closing ‘Just Waitin’’, a surprisingly entertaining narration.

This is an excellent album which is vying to be my favorite of 2016.

2 responses to “Album Review: John Prine and Friends – ‘For Better, Or Worse’”