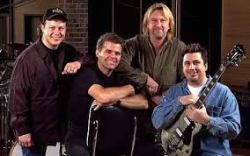 For many years, the prototypical country group took the form of a gospel quartet or quintet, modeled after such gospel favorites as the Jordanaires, The Old Hickory Singers, The Oak Ridge Quartet or the Blackwood Brothers. These groups were strictly vocal groups, with some sort of instrumental accompaniment, often nothing more than someone playing the piano. It was rare that the group handled its own instrumentals, other than perhaps the original version of the Sons of The Pioneers; and aside from western groups such as the Sons of The Pioneers, the repertoire was almost entirely gospel.

It was not until Alabama came to prominence in 1980 that the modern day concept of a country group entered the public conscience. Alabama was comprised of three cousins (Randy Owen, Teddy Gentry and Jeff Cook) plus a very talented outsider in drummer Mark Herndon. Unlike other country groups, Alabama had a designated lead vocalist in Randy Owen, with the other members providing instrumental support and taking an occasional lead vocal, mostly on album cuts.

Of course, every trend and/or fad runs its course and Lonestar (1992) would prove to be the last really successful band of the wave that started with Alabama.

Lonestar would prove to have staying power, releasing eleven studio albums (five reached gold or platinum status) and enjoying a large number of hit singles including nine that reached #1 and another nine that landed in the country top ten. One of their #1 singles, “Amazed” also reached #1 on Billboard’s Hot 100 for two weeks sandwiched between singles by Savage Garden and Destiny’s Child, and it charted in the United Kingdom.

Although the top ten singles ceased in 2006, Lonestar is still around having just issued a new album. Richie McDonald left the group for a while, but has since returned and the band once again consists of Richie McDonald on lead vocals and piano, Michael Britt on lead guitar, backing vocals, Keech Rainwater banging on the drums and Dean Sams on keyboards, acoustic guitar and backing vocal. This is essentially the original group minus John Rich.

Lonestar has a website and is playing a full schedule of road appearances. They still sound good, and if you liked them during their 1990s heydays, you’ll like them now.

So sit back as enjoy our Spotlight review of the one of the leading country groups of the 1990s and the early 2000s.