Leave a comment Posted by Occasional Hope on August 19, 2016 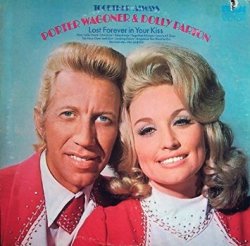 The duo’s eighth album, released in 1972, featured only songs written by one or the other of them. Dolly’s talent was by now outshining Porter’s at least vocally, and although she wrote only four of the songs here to Porter’s six, both of the singles were her songs. Dolly’s voice sparkles throughout, and Porter sounds mediocre in comparison on his solo sections.

‘Lost Forever In Your Kiss’ is a romantic song about falling in love which was a top 10 hit. It is very pretty, although Dolly’s vocal works better than Porter’s. The perky mid-tempo piano-led title track is about a more mature but solidly happy relationship, is not as memorable, and was less successful, although it reached #14.

‘Poor Folks’ Town’, which Dolly revised and recorded in a slightly different version a few years later, is a cheerful song with bouncy fiddle accompaniment about being happy despite lacking material things:

We got no money but we’re rich in love
That’s one thing that we got a plenty of
So come on down have a look around
At rich folks living in a poor folks town
We got no carpets on the floor
We got wall to wall love
Who could ask for more?

‘Christina’ is an adoring lullaby to a couple’s new baby; it is so personal and realistic I wonder if Dolly, herself childless, wrote this for a friend’s child?

Two of Porter’s songs are classic cheating songs. The excellent ‘Looking Down’ has an unrepentant pair of cheaters defending themselves against the criticism of others:

In ‘You And Me, Her And Him’ the couple plan on talking it all out with their other halves:

You and me, and her and him, must get together
And see if maybe we can find a way
To put an end to hurting one another
Cause he don’t know
And she don’t know
How much we hurt each day
It’s not fair, and you and I both know it
To have to hide and love the way we do
The time is now that we must get together
Her and him
Me and you
She and I had lost it long before I met you
We tried and tried but all the love had gone
And I guess respect is all that’s kept me with him
Cause there hasn’t been no love there in so long

‘Love’s All Over’ is also about a once-illicit affair which is now all too obvious to everyone. ‘Take Away’ is a more conventional love song.

‘Ten Four – Over And Out’ is a novelty inspired by the CB radio craze of the 1970s. In fact Porter Wagoner was ahead of the game, as it didn’t become a country music trend until a few years later, after a national reduction in speed limits made the radios’ messaging system popular. In this song Dolly and Porter are a sparring married couple communicating to comic effect by the radios, which means the song is still entertaining today even if its context has dated.

Finally, ‘Anyplace You Want To Go’ is about the power of daydreams in a workaday life.

This album showcases the duo at their best. The tracks are split between the third and fourth discs of the wonderful Bear Family box set.