Album Review: Porter Wagoner & Dolly Parton – ‘Just Between You and Me’ 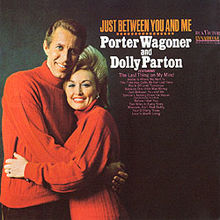 Just Between You and Me was released in January 1968 and is notable for being the first collection of Porter Wagoner/Dolly Parton duets, as well as Dolly’s first recordings for the RCA label. Bob Ferguson is the credited producer; however, it has been revealed that Porter, not Ferguson, was the actual producer of Dolly’s early solo recordings for RCA, so it’s not unreasonable to assume that Porter was also involved with the production of the Porter/Dolly duets.

The album contains just one single – a common practice in those days — which was released a few months ahead of the album. “The Last Thing on My Mind” was a remake of Tom Paxton’s folk-pop smash that was recorded by dozens of artists in various genres. It is quite different from the rest of the album, as well as Porter and Dolly’s future work, which was almost always solidly in the traditional country camp. The single charted at #7 and paved the way for many more duets which would occur over the next decade or so.

The title track is one of my favorites. Written by Jack Clement, it had been a hit earlier that year for another recent RCA signee by the name of Charley Pride. Another favorite, “Before I Met You” had been a hit for Carl Smith in 1956. Charley Pride also covered this one shortly after arriving at RCA. Pride’s version did not chart, but his version is the one I’m most familiar with. Porter and Dolly’s version is also quite good but it inexplicably omits the song’s last verse.

One of the reasons given for the eventual demise of the Wagoner/Parton partnership was Porter’s domineering attitude; it was apparently made abundantly clear from the start that he was the employer and Dolly was the employee. Porter never denied the accusation; however, none of that is apparent from listening to this collection of songs. Porter was clearly the bigger, more established star at this stage of the game, but there is no hogging of the spotlight. In fact, there seems to have been a concerted effort to use this album to promote Dolly’s career. It includes several songs penned by Dolly, including “Love is Worth Living” (the B-side of “The Last Thing on My Mind”), and “Mommie, Ain’t That Daddy” which is my least favorite song on the album. The melodramatic tale of a hopelessly alcoholic husband and father (who doesn’t seem to have done anything to remedy his circumstances) is a crass attempt to tug at the heartstrings. It was not the last song of this type that Porter and Dolly would record together, although most of their future songs of this ilk involved dying children. It’s a dud, but thankfully it’s the only album’s only misfire.

The album also includes several songs that Dolly co-wrote with her uncle Bill Owens. “Because One of Us Was Wrong” and “Two Sides of Every Story” are typical of the type of song Porter and Dolly would become famous for. “Put It Off Until Tomorrow” had been the most successful Owens/Parton composition up to that time. Bill Phillips had scored a Top 10 hit with it in 1966 (featuring Dolly as the uncredited harmony vocalist). Dolly recorded the song herself for her one and only Monument album. This remake with Wagoner is unusual in that it is not a duet; Dolly sings the lead throughout, while Porter harmonizes. Another observation: unlike most modern “duets” where the artists sing around each other, Porter and Dolly actually sing and harmonize together much of the time.

Just Between You and Me might not contain any of Porter and Dolly’s most famous hits, but it was a more than satisfactory introduction to one of country music’s best male-female duos.

One response to “Album Review: Porter Wagoner & Dolly Parton – ‘Just Between You and Me’”