Leave a comment Posted by Jonathan Pappalardo on July 22, 2016 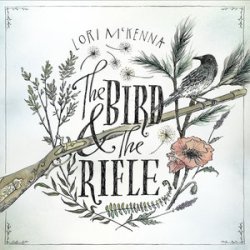 The Bird & The Rifle comes on the heels of Lori McKenna finally achieving the level of songwriting success she’s so richly deserved since Faith Hill plucked her from obscurity in 2005. This record, her tenth, positions her at the next level – the masterful Dave Cobb produced it.

She’ll likely always be known more for songwriting cuts by other artists, which is a shame, since she’s a powerful artist in her own right. I’ll always be a bit biased, as McKenna is a local in my neck of the woods here in Massachusetts.

McKenna smartly included her own version of “Humble & Kind” among these ten tracks, which will hopefully draw some attention to the album. Given her local status I first heard the song when Little Big Town invited her on stage at the South Shore Music Circus in 2014. She also sang on Almost Famous, the local music show on my radio station 95.9 WATD-FM, long before Tim McGraw released it on Damn Country Music. Her version of “Humble & Kind,” which she wrote to impart wisdom to her children, is gorgeous and far more homespun than the one McGraw brought to #1.

The album, as one would expect, does go beyond that song. While she doesn’t treat us to “Girl Crush,” thank goodness, she does give us nine more original numbers. The album kicks of with the self-aware “Wreck You,” which Heidi Newfield recorded on What Am I Waiting For in 2008. The song, co-written with Felix McTeigue, details a shift in McKenna’s most important relationship:

I don’t know how to pull you back

I don’t know how to pull you close

All I know is how to wreck you

Somethin between us changed

I’m not sure if it’s you or me

But lately all I do seems to wreck you

McKenna also solely wrote a number of the album’s tracks. “We Were Cool” is nostalgia at its finest, reliving in brilliant detail, carefree times with great friends. Pessimism grips “Giving Up On Your Hometown,” a critical view of change in the place you grew up. “If Whiskey Were A Woman” is the perfect bookend to “Wreck You,” a darker take on a concept conceived by Highway 101 twenty-nine years ago. McKenna imagines, through a killer vocal, how much more sinister the bottle would be as a relationship partner than her, for her husband.

The Love Junkies, masterminds behind “Girl Crush,” reunite for a couple of tracks on The Bird & The Rifle. “Always Want You,” a lush waltz, deals with sameness and the idea that no matter what happens in this world, she’ll always want her man. Mid-tempo rocker “All These Things” was co-written by two-thirds of the trio (McKenna & Liz Rose) and while I love the melody, it offers little lyrically beyond a laundry list of different signifiers.

The morning after never sounded so beautifully regretful as it does on “Halfway Home,” a co-write with Barry Dean and easily one of the album’s strongest tracks. “Old Men Young Women” is brilliant commentary on the phenomenon of third wives that are often years their husband’s junior. A Modern Family rerun, in which Claire and Hailey in which the pair consider companion tattoos, inspired the title track. McKenna co-wrote the lovely ballad with Caitlyn Smith and Troy Verges.

The most apparent takeaway from The Bird & The Rifle is how little McKenna has changed in the face of momentous success. She clearly has a solid sense of self, which undoubtedly continues to serve her well. While the album does feature songs stronger than others, it’s still one of the year’s top releases and not to be missed. McKenna’s pen and Cobb’s production make for a fruitful marriage I hope continues in the years to come.