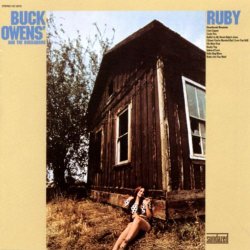 Back in the days writing for The 9513 Blog, I would post occasional reviews on Amazon. We are republishing updated versions of some of those reviews here.

Give Buck Owens credit – he knew that the “freight train ” sound was growing a bit stale and he was willing to experiment. I’ve Got You On My Mind Again was the first album to feature background voices and strings, something he continued on the next studio album Tall Dark Stranger (both 1969). In 1971 Owens took a more contemporary turn with his Bridge Over Troubled Water album, which was recorded without fiddle or steel guitar and featured songs by the likes of Paul Simon and Donovan. Later in 1971 came Ruby and Other Bluegrass Specials.

Not exactly bluegrass in it’s instrumentation (marred by drums and organ) it nevertheless is a fun romp through eight bluegrass classics plus two from the Buck Owens catalogue recast as bluegrass. Both singles issued from the album, “Rollin’ In My Sweet Baby’s Arms” and “Ruby (Honey Are You Mad At Your Man)” went to #1 on the more sales-oriented Cashbox charts (Billboard had them at #2 and #3 respectively). The title cut was a hit the year before for the Osborne Brothers, so it was still fresh in the public memory as was “Rocky Top” the Osborne Brothers big hit from 1968. “Ole Slew Foot” was part of both the country and bluegrass repertoire and so was familiar to fans of both genres although the only hit on the song was by Porter Wagoner. “I Know You’re Married But I Love You Still” was one of the most requested tunes for the beloved bluegrass duo of Don Reno & Red Smiley. Of course, everyone knows “Uncle Pen”.

Owens didn’t stray too far from bluegrass with his next album Too Old To Cut The Mustard, with son Buddy Alan. but Owens never again returned to the genre after that. Good clean fun – equal emphasis on all three words.