Leave a comment Posted by Occasional Hope on July 18, 2016 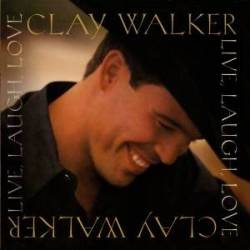 As the 90s drew to an end, Clay stopped working with former producer James Stroud. His blandly titled 1999 album was co-produced by the artist with Doug Johnson, and saw the artist moving in a more R&B direction.

Lead single ‘She’s Always Right’ (written by Lonestar’s Richie McDonald with Ed Hill and Phil Barnhart) is a rather bland contemporary ballad about a happy marriage. Clay sings it soulfully, but the song isn’t at all memorable. It reached #16 on the Billboard country chart. The theme is repeated later on the album with the very similar ‘Woman Thing’, written by Larry Boone, Tracy Lawrence and Paul Nelson.

The beachy title track was a little more successful, peaking just outside the top 10. Written by Gary Nicholson and Allen Shamblin, it has Caribbean instrumentation and a syncopated vocal which haven’t worn well.

The self penned big ballad ‘Once In A Lifetime Love’ wasn’t really a country song, and although Clay sings it well, at the turn of the millennium that was still enough to deny it any chart action when it was the album’s last single. Clay and his co-writer Jason Greene also contributed the pleasant but dull ‘Lose Some Sleep Tonight’ and the disastrously ill-judged ‘Cold Hearted’, a feeble attempt at an R&B song which falls completely flat.

‘This Time Love’ is a soul-drenched ballad which is okay on its own terms, but has nothing to do with country music.

‘If A Man Ain’t Thinking (‘Bout His Woman)’, written by Buddy Brock, Debi Cochran and Jerry Kilgore, on the other hand, is a country song, and very good. The mid-paced ‘It Ain’t Called Heartland (For Nothin’)’ is also quite enjoyable.

The best song is a cover of Earl Thomas Conley’s ‘Holding Her And Loving You’. Clay doesn’t bring anything new, but he sings it with emotion.

Clay sings with great commitment and enthusiasm on this album, but not much of it can really be classified as country. Listeners with more eclectic tastes may like this better than I did.