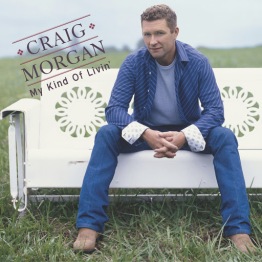 2005’s My Kind of Livin’ stands as Craig Morgan’s most successful album to date. His second release for Broken Bow, it remains his only album to be certified gold and features his biggest charting singles.

Morgan’s previous album established him as a syrupy balladeer of emotional story songs. He gained moderate traction with hits like “Almost Home” and “Every Friday Afternoon,” but he still hadn’t found his footing. That changed when “That’s What I Love About Sunday” hit radio in November 2004. The warm ballad, with ribbons of dobro and a pure bright melody, skyrocketed to #1. The track held the top spot for four consecutive weeks, went on to become Billboard’s number-one song on the year-end country chart and gave Broken Bow their first multi-week chart topper. I quite like the song, which manages to maintain a spiritual bent while celebrating the Sabbath without overwrought clichés.

I adore the album’s second single, the infectious banjo, fiddle and steel guitar-heavy “Redneck Yacht Club.” The song foreshadows bro-country with themes of summertime, partying and scantly glad women but it mostly focuses on the fun (and innocence) of being out on the lake with your friends and doesn’t even hint at hookups, sex or gender objectification. Listening in to it again for the first time in many years, I’d almost forgotten that a song this country was able to score major radio airplay just a few short years ago. I’m not suggesting “Redneck Yacht Club” is even close to the greatest song ever written, but it illustrates what summertime country music should aspire to sound like. It makes me sick how far we we’ve devolved in the decade since and even more perplexed as to why we even had to change so much in the first place (I’d add Blake Shelton’s “Some Beach,” co-written by Rory Feek, to this conversation, as well).

Morgan co-wrote the album’s third and final single while on tour with Keith Urban with the hopes he would put it on his next project. After cutting the demo, he felt “I Got You” fit his own style and decided to keep it for himself. The song is a somewhat unremarkable uptempo love song that Morgan saves with his sincere vocal and arrangement that borderlines muscular, but saves enough breathing room for the steel guitar to nicely shine through. Those benefits weren’t enough for the song to gain traction, though, and it stalled at #12.

Morgan also had a hand in co-writing six more of the album’s tracks. The album’s title comes from “I’m Country,” a mid-tempo laundry list of southern clichés that has traditional elements but little else by way of appeal. “Ain’t The Way I Wanna Go Out” explores cheating, a scorned husband and murder with cluttered production values that grate on the listener.

“Rain For The Roses” is a workingman’s anthem about The Roses, a farming couple in a southern town. I would’ve enjoyed it more without the title’s cutesy play-on-words and Morgan’s insistence of turning the chorus into a power ballad. “That’s When I’ll Believe That You’re Gone,” returns Morgan to the syrupy emotional ballads from his previous set, with mixed results. The production is good, but the lyric is too middle-of-the-road to reach maximum emotional complexity.

“If You Like That” is reminiscent of turn-of-the-century Mark Chesnutt and is one of the better songs amongst his co-writes. I love the simple arrangement and heartfelt lyric. Morgan’s final co-write “Blame Me” is a terrible duet with John Conlee and Brad Paisley that joins “I’m Country” in wasting space with uninspired southern signifiers.

“Lotta Man (In That Little Boy)” gives a lot away by its title and offers little more as a song. The ballad just isn’t as compelling as it could be with a story that settles for predictable rather than surprising. “Cowboy and Clown” centers around friendship on the rodeo circuit and despite a stupid title is a slightly above average song. The album’s final number, “In My Neighborhood” is nothing more than a ‘where I’m from’ type of song.

My Kind of Livin’ mostly gets the sonic overtones right. I have to give Morgan and his co-producer Phil O’Donnell credit for sticking with production values that lean heavy on actual country instrumentation. That’s unfortunately all for not since they got the music wrong. Besides the three singles, there’s hardly anything here worth salvaging. My Kind of Livin’ isn’t an embarrassingly bad album, it’s just wrought with clichés and tries too hard to play up the southern themes it panders to. This is squarely mid-2000s country lacking in imagination and originality. Check it out if you want to, I always recommend people come to their own conclusions, but it did little for me.

One response to “Album Review: Craig Morgan – ‘My Kind of Livin””