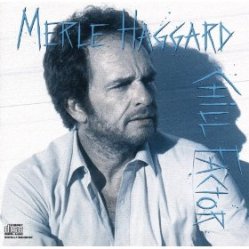 Merle Haggard turned fifty shortly before Chill Factor was released in October 1987. To those of us who remember when the blues and jazz were still influences on country music (rather than the hip-hop and rock that seem to be today’s influences) this album is an overlooked treasure out of the Merle Haggard catalogue. The album is compromised of eleven songs of which Merle wrote six by himself, with three co-writes and two songs from outside sources.

I’m not sure, but I think this was the first complete Merle Haggard album recorded without longtime Stranger Roy Nichols (1932-2001) on lead guitar. Roy, who was a truly great guitar player, and a quintessential part of the Merle Haggard sound, retired in early 1987 due to health issues.

The album opens with the title track, a solo Haggard composition. “Chill Factor” is a very melancholy song about a down period in the singer’s life. Taken at a slow tempo the song features horns and winds during the last third of the song and comes to a fade ending. “Chill Factor” was the first single from the album and reached #9 on the Billboard country chart:

“Twinkle, Twinkle Lucky Star”, another Haggard composition, was the second single released from the album. It would prove to be Merle’s final #1 single. A mid-tempo song, the song finds the narrator wishing upon a star.

Like two ships on the ocean
We drifted apart …

“Man From Another Town” is yet another melancholy song, this time from the pens of Haggard and his most frequent co-writer at the time, Freddy Powers, This song reflects on relationship that should not be in that the man is thirty years older than the woman.

The great Hank Cochran wrote “We Never Touch At All”, a song that would have been a #1 record if it had been released twenty years earlier. The song features a 1960s style country accompaniment with excellent steel guitar by longtime Stranger Norm Hamlet. The song was released as the third single from the album and reached #22. The song is about a relationship that is slowly unraveling. I think it is the best song on the album:

“You Babe” was the fourth and final single pulled from this album, reaching #23. The song is a mid-tempo ballad, full of hope, by a man who has found what was truly important. The comes from the pen of Sanger D “Whitey” Shafer who was a friend and co-writer with Lefty Frizzell:

“Thanking The Good Lord” is an upbeat and up-tempo written ny Merle and T.A. Lane:

I could easily see Leon Redbone recording “After DarK”, a very jazzy and reflective mid-tempo song with some instrumental breaks that give sax and trumpet player Don Markham a chance to stretch out.

Merle’s solo composition “1929” opens up with some nice dobro playing by Norm Hamlet, and the general feel of the instrumental accompaniment sounds like something that the legendary “Blue Yodeler” Jimmie Rodgers (aka “the father of country music” or the “Singing Brakeman”) would have felt perfectly comfortable singing. This song looks to possible bad times ahead. Like many of Jimmie’s songs, some Memphis style horns kick in during the latter part of the song:

I can really relate to “Thirty Again”, a slow introspective ballad with a hint of a chuckle in the vocal. Like several of the songs on this album, this song straddles the border between country and jazz.

Similar to the narrator of the song I don’t think I’d care to be a teenager again but thirty sounds like a good age to be.

The album closes up with a pair of fairly traditional country ballads.

“I Don’t Have Any Love Around” opens with a fiddle and steel guitar introduction and generally keeps the feel of slow traditional country music ballad. I could see this song as a single during the 1950-1975 heyday of the genre.

“More Than This Old Heart Can Take” is a typical barroom crying-in-your-beer song, a solid mid-tempo country ballad with plenty of fiddle and dobro and an ageless story:

I mentioned that this was the first full Haggard album to be missing Roy Nichols. In his place we have the great Grady Martin handling much of the lead guitar work. I think Martin’s presence lends itself to the jazzy feel Haggard seemed to be seeking with this album.

As for the album itself, I think that the album accurately reflects the roller coaster ride that Merle was experiencing at the time. He had one marriage (to Leona Williams) break rather acrimoniously, but at the point this album was released, Hag was a relative newlywed having married Debbie Parret in 1985, a marriage that would last until 1991. Like many veteran artists, he was having a hard time getting radio play as the singles from this album would prove. In all, Merle is revealed as being clear-minded and perceptive, with some nostalgic longings, but still firmly rooted in the present . When initially released this album received mixed reviews, (but remember that jazz has always been an anathema to rock audiences – there was even a band calling itself Johnny Hates Jazz) and most music critics had no feel for jazz in any form.

I liked this album when it was initially issued and I like it even more today – I regard it as a solid A.