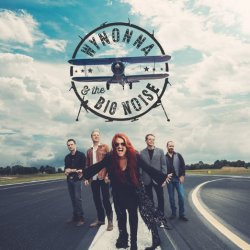 Wynonna & The Big Noise represents a change in direction for Wynonna Judd, a move away from the bland AC of most of her post-1993 albums. It is not a move back towards country, but I have long since given up hope that she will ever release another completely country album, barring another reunion of The Judds. There are more country moments on this album than we’re typically used to, however, and the entire album has more rootsy, organic feel than anything she’s done as a solo artist.

Wynonna’s husband Cactus Moser produced the album. Chris Stapleton and Julie Miller both contribute songs and Jason Isbell provides the duet vocals on “Things That I Lean On”, which I reviewed back in February. That track was one of a few that were released via iTunes in advance of the full album, but it does not appear to have been released as a single. That seems to suggest a change in strategy on the part of Curb Records, which may be forgoing promoting the album to radio and seeking alternate outlets instead. The album definitely seems to have been made without regard to the charts, with Wynonna and the band performing songs that moved them. There are plenty of songs that cater to Wynonna’s R&B/blues roc k leanings, beginning with the opening track “Ain’t No Thing”, penned by Chris Stapleton and John Scott Sherrill, and continuing on with “Cool Ya”, Julie Miller’s “You Make My Heart Beat Too Fast” and “Choose To Believe”, written by Kevin Welch and Charlie White.

She sounds like she is truly enjoying herself on all of these, but it is the quieter tracks, the ballads, that are the album’s best moments, beginning with the aforementioned “Things That I Lean On.” “Jesus and a Jukebox”, the most country-sounding song in the collection, is my favorite, with the Celtic-flavored “Keeps Me Alive” a close second. “Every Ending (Is Its Own Beginning)” is a very nice middle-of-the-road mid-tempo number that Wynonna and Moser wrote with Doug Johnson and Billy Montana.

The album’s most commercial track “Something You Can’t Live Without” is a Cactus Moser and David Lee Murphy composition that was a non-charting single in 2013, shortly after The Big Noise band was formed. It reminds me of some of Wy’s early solo efforts, although at five minutes and 33 seconds, it is way too long (presumably an edited version was sent to radio) and it begins to drag a bit after a while.

I haven’t been a huge fan of much of Wynonna’s solo work but this album was a pleasant surprise. Moser seems to have helped her find her niche. I look forward to their future projects together.