Leave a comment Posted by Occasional Hope on March 25, 2016 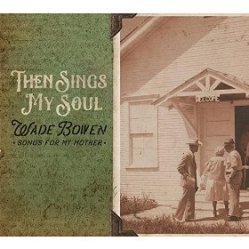 We last heard from Wade Bowen when he teamed up with Randy Rogers for the excellent honky tonker Hold My Beer, Vol. 1. His latest project is rather different: a straightforward collection of traditional hymns, initially recorded as a gift for his mother. The production and song choice is very similar to Joey + Rory’s recent Hymns, and this album is a poor second in terms of both vocal prowess, and the emotional impact resulting from Joey’s death soon after the record’s release. However, Wade approaches the project with a sincerity which wins over the listener. Production is generally lowkey, with one unfortunate exception.

The best track is the quietly reflective version of ‘Amazing Grace’ which opens the album, with an organ backing. ‘Softly And Tenderly’ is also beautifully interpreted, and I very much liked his versions of ‘Farther Along’, ‘Peace In The Valley’ and ‘Take My Hand, Precious Lord’. ‘In The Garden’ and ‘The Old Rugged Cross’ are nicely done too, but I was a bit bored by ‘How Great Thou Art’.

‘I’ll Fly Away’ and ‘Just Over In The Glory Land’ are cheerfully upbeat, backed by a choir. ‘Precious Memories’ felt more phoned in. There is one track where Bowen indulges himself with the Southern rock/gospel styled ‘Saved’ which feels rather out of place.

The trouble with this album as a record is not that it is bad at all – indeed, I rather enjoyed it, and it makes a fitting record to play today. It is simply that there are so many better versions of these songs out there.