Leave a comment Posted by Occasional Hope on February 8, 2016

1999’s Cruel Moon was another excellent slice of Americana 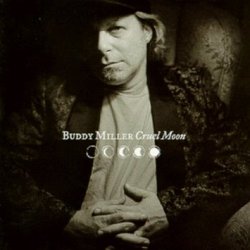 flavored country (or possibly country-flavored Americana) from Buddy Miller. Brilliant musicianship, high quality songwriting, instinctively tasteful production and vocals which while not the smoothest are strongly emotional and sell the songs: what more could one ask for?

The outstanding ‘Does My Ring Burn Your Finger’ (written by Buddy with wife Julie) is a modern classic, also having been recorded by Lee Ann Womack and others including soul singer Solomon Burke on his Miller-produced Nashville set. The lyric calls to mind the Charley Price 1960s classic ‘Does My Ring Hurt Your Finger’, but the newer song is fiercer and edgier as he accusingly questions a restless spouse,

Does my ring burn your finger?
Did my love weigh you down?
Was a promise too much to keep around?

Julie was Buddy’s most frequent co-writer on this album, also co-ring the graceful, melodic waltz which lends the album its title. Emmylou Harris (for whom Buddy had been playing lead guitar) provides her distinctive harmony on this gorgeous pure country tune. They also wrote the sad but pretty-sounding ‘In Memory Of My Heart’, a wistful ballad on which Julie sings the harmony. ‘I’m Too Used To Lovin’ You’ is another very good song written by the couple.

The writing partnership was joined by Jim Lauderdale for a couple of songs. ‘Looking For A Heartache Like You’ is rhythmically catchy and upbeat, and was later recorded by Patty Loveless. In contrast, ‘Sometimes I Cry’ is imbued with a raw pain.

Buddy did not rely solely on his own songs for this album. The energetic and catchy ‘Love Match’ was written by Paul Kennerley; this uses boxing as a metaphor for falling in love and features a martial beat and guest vocals from Steve Earle, another of his former employers. While that song is archetypical Steve Earle in its sound, Buddy also chooses to cover one of Earle’s finest ballads, ‘I’m Not Getting Any Better At Goodbye’. Mark Chesnutt’s cut is still my favourite version of that song, but Buddy’s vulnerable take is excellent too, backed by a sparse arrangement.

‘I’m Gonna Be Strong’ is a classy 60s pop ballad with a soothing melody, which was most successful for Gene Pitney. While Buddy isn’t a conventionally great vocalist, he invests this song with strong emotions, backed by the harmony vocals of Joy Lynn White. Buddy turns to bluesy gospel with Pop Staples’ ‘It’s Been A Change’. Julie Miller’s ‘Somewhere Trouble Don’t Go’ (later covered by Miranda Lambert) is an up-tempo relentless rock-edged number with a reverb-heavy production, which is very well done of its kind but not one of my favorites.

This is an excellent album which I strongly recommend.