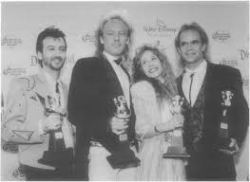 Paulette Carlson was born in Minnesota in 1952, and began singing in bars there and in North Dakota. She signed her first solo record deal with RCA in 1983, but none of her singles for the label had made much of a splash. Groups were more successful in country music in the 1980s than they had ever been before, and in 1986 Paulette, who had relocated to LA, at the southern end of the iconic Pacific coast road, US Highway 101, recruited three talented musicians in Jack Daniels on lead guitar, Curtis Stone on bass guitar, and Scott (always known as Cactus) Moser on drums, to form the band known as Highway 101. The three men were all making a living as studio session musicians, but wanted a shot at the big time.

The partnership was a magical one, with Paulette’s distinctive vocals matched by the band’s radio-friendly sound. They soon signed to Warner Brothers, and their debut single, Carlson’s ‘The Bed You Made For Me’ was an immediate hit. A string of hits followed in the remaining years of the decade, and they won both the CMA and ACM Vocal Group of the Year awards in 1988.

But there was trouble in store. Paulette Carlson still had solo ambitions, and in 1990 she chose to leave the band in favour of a solo deal with Capitol. Unfortunately for her, the album she released in 1991 featured mainly weak material, and her singles flopped at radio. The boys he left behind had better luck. Realising that Highway 101’s big selling point was the strong female lead, they recruited an able replacement in Nikki Nelson, a 22 year old from California. She made two albums with Highway 101, and their singles gained some airplay, although they fell short of the success of the original brand. Jack Daniels then departed, and the remaining trio moved to Liberty, a new Nashville label founded by legendary exec and producer Jimmy Bowen, for one album and single.

Both Carlson and her former bandmates hankered after former glories, and she, Daniels and Stone teamed up again in 1996. They recorded a new album, suitably entitled Reunited, on Intersound Records, but it was too late to rekindle the fire they had enjoyed on country radio.

Another new start, and new lineup, was briefly created in 1998, featuring Stone, Moser, and two newcomers: vocalist Chrislynn Lee and Charlie White. Subsequently, Nikki Nelson returned as lead vocalist, backed by Moser, Stone, and a frequently changing lead guitarist. Cactus Moser (now married to Wynonna Judd) unfortunately lost a leg in a motorcycle accident in 2012, but continues to tour with Highway 101. Their only recent recorded output is a Christmas single and DVD in 2010.

In between the usual December fare of year-end reviews and Christmas records, we will be surveying the career of Highway 101.