Album Review: Glen Campbell – ‘By The Time I Get To Phoenix’ 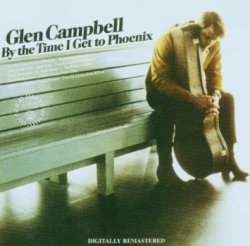 ‘By The Time I Get To Phoenix’ was the song which made Glen Campbell a star in 1967, thanks to a perfect combination of song, singer and arrangement. It is still an all-time, cross-genre classic, instantly recognisable and exceptionally good. A beautiful melody and wistful vocal are matched by a heavily orchestrated arrangement, which sweetens the record for pop consumption despite the bittersweet lyric, which tells of a man leaving his lover while she sleeps. Glen had already had a few minor country, and even more minor pop, hits, but this was the single which hurtled him into the bigtime, and deservedly so. It was a #2 country hit, and reached the top 20 AC and top 30 pop, although it doesn’t actually sound particularly country even by the standards of the Nashville Sound. It was in the contemporary pop and open categories that he won Grammies for the record (his earlier country single ‘Gentle On My Mind’ won the same year in the country category). Glen was mainly associated with country music professionally, but his work was often hard to categorise, and with a song this remarkable, one ceases to care. The song has enjoyed great staying power; by 1990 it had become the third most played song over the previous half-century, and is known internationally.

A second single, ‘Hey Little One’, was not so successful, but still made the top 20 on both country and AC charts. It was a cover of a Dorsey Burette pop hit from 1960, and it is capably sung by Glen but a little dull.

A cover of Simon & Garfunkel’s folk-rock/pop hit ‘Homeward Bound’ is nicely sung, but here the heavy orchestration (not dissimilar to that on ‘By The Time I Get To Phoenix’) inappropriately swamps a song about a ‘one man band’ folkie on his travels. A stripped down acoustic version would have been lovely.

Ernest Tubb’s ‘Tomorrow Never Comes’ works better with the Glen Campbell-and-orchestra reworking. Glen’s passionate vocal is impressive (although it verges on going over the top towards the end), and completely reimagines the song from Tubb’s original hard country shuffle. Another effective altered interpretation arises with a relaxed loungy version of a lesser known Bob Wills tune, ‘I’ll Be Lucky Someday’.

Glen is more faithful to the original when he takes on ‘My Baby’s Gone’, a Hazel Houser song best known for the Louvin Brothers’ version. Glen’s version is very nice indeed, beautifully sung and interpreted, and while the arrangement has dated a bit, especially the backing vocals, it still sounds good. This is my favourite track here after ‘By The Time I Get To Phoenix’.

Bill Anderson’s ‘Bad Seed’ has more of a rock feel. Neither Glen nor Bill comes across as much of a rebel, but the song works pretty well, about a bad boy drifter who shows little regret about leaving his latest girl. ‘You’re Young And You’ll Forget’, written by Jerry Reed, is another leaving song portraying a rambling soul. ‘Cold December (In Your Heart)’ is a 60s pop ballad, written by Alex Hassilev of the contemporary folk group The Limeliters, and is pleasantly performed.

Glen co-wrote a couple of the tunes. The perkily upbeat ‘Back In The Race’ is enjoyable. The closing ‘Love Is A Lonesome River’ is a melodic lost love number.

This is a very good album, but certainly not a traditional country one. It mixes country, folk, rock and sophisticated pop/AC sounds even handedly, and helped to set the template for Glen Campbell as an artist.

2 responses to “Album Review: Glen Campbell – ‘By The Time I Get To Phoenix’”