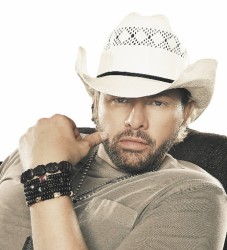 Our October spotlight artist is one of the few remaining commercial links to the 1990s and one who arguably was the face of country music during the first decade of the twenty-first century. Toby Keith Covel was born in Clinton, Oklahoma on July 8, 1961. His interest in music was sparked during summers spent with his grandmother, who owned a supper club in Fort Smith, Arkansas. He played football in high school and played semi-professionally after graduation. During that time he was also a member of the Easy Money Band, which played in local bars, but the oil industry, where he worked as a derrick hand, paid the bills.

Covel dropped his surname for professional purposes and moved to Nashville in 1990, with the goal of obtaining a recording contract by his 30th birthday. With the self-imposed deadline looming, Keith was about to give up and return to Oklahoma, when he was signed to Mercury Records by Harold Shedd. His first single for the label, “Should’ve Been A Cowboy” quickly climbed to #1. He spent the next five years being shuffled around between Mercury and its sister labels Polydor and A&M. His records consistently made the Top 10 and he regularly achieved platinum level sales, yet he struggled to stand out from a pack that was dominated by artists such as Garth Brooks, Clint Black, Alan Jackson, and Travis Tritt.

All of that would change when Keith left Mercury in 1998 to sign with the fledgling DreamWorks Nashville label. The following year he released his breakthrough single, the in-your-face “How Do You Like Me Now”, which he had co-written with Chuck Cannon some years earlier, but Mercury had not let him record. The suits at DreamWorks also had some reservations, but they quickly abated when the record spent five weeks at #1 in the spring of 2000.

Keith became a label exec himself, founding the Show Dog Nashville imprint when DreamWorks closed its doors in 2005. Show Dog Nashville has since merged with Universal South and is now known as Show Dog-Universal Music. By this time, Toby’s bombastic personality and his political views were beginning to overshadow his music. His response to the events of September 11, 2001, “Courtesy of the Red, White and Blue (The Angry American)” played to country music’s conservative base and earned him the contempt of the political left, as did 2003’s pro-military “American Solider”. Both records were multi-week #1s, and eventually led to a very bitter public feud with The Dixie Chicks’ Natalie Maines.

Although radio has cooled towards Toby Keith in the past few years, he remains one of country music’s most visible and prolific artists. His latest album 35 MPH Town, will be released on October 9th, providing us with the opportunity to look back at Toby’s career so far.