Album Review: Easton Corbin -‘About To Get Real’ 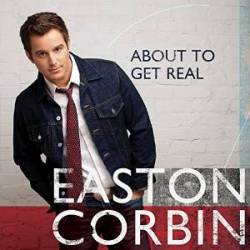 Rather optimistically heralded as a new George Strait on his debut in 2009, my enthusaism for Easto Corbin has somewhat waned since his run of gold-selling singles. I always felt that while he had potential, his material was not quite good enough for that smooth voice and Carson Chamberlain’s steel-laden production. I am sorry to say that his long-delayed third album was not worth waiting for. Chamberlain has modernised the sound a little, but that’s not the main problem. The real disappointment of this album is that the songs are all so lackluster and forgettable, with just a few exceptions.

The pleasant sounding but forgettable lead single ‘Clockwork’ performed unimpressively last year, not quite reaching the top30. The song isn’t bad apart from the unnecessary and irritating repetition of the word ‘girl’, but Corbin’s vocal lacks force or emotion. He just doesn’t sound as if he really cares about the emotional trap of a repeat pattern his character has fallen into.

It is one of five songs co-written by producer Chamberlain. ‘Kiss Me One More Time’ (by Chamberlain, Wade Kirby and Phil O’Donnell) is just okay. The remaining three Chamberlain songs include Corbin as a co-writer. I enjoyed the bouncy ‘Diggin’ On You’ even though it is pure fluff. ‘Damn, Girl’ suffers from rather too facile rhymes but isn’t too bad. The best of these collaborations, however, is the best song on the album. ‘Like A Song’, written by the pair with Stephen Allen Davis, is a beautiful ballad which shows just how good Corbin could be given worthwhile material.

Current single ‘Baby Be My Love Song, written by Brett James and Jim Collins, is a poorly written boring love song relying on bro-country clichés and a busy production, but it seems to be more palatable to country radio than its predecessor, and made it into the top 10.

‘Are You With Me’ from his last album was subjected to an unspeakably horrible dance remix last year and the result was a hit single in France and Belgium, and perhaps because of that he has recut the song straight here. The reclaimed version is quite a pretty sounding mellow ballad which Easton sings with a genuine warmth, and which is one of the few songs I like on this album. It was written by Shane MacAnally, Tommy Lee James and Terry McBride.

The enjoyable ‘Wild Women and Whiskey’ written by McBride with Ronnie Dunn is a pretty good song which sounds like a Brooks & Dunn offcut, while sunny beach tune ‘Just Add Water’ would fit perfectly on a Kenny Chesney record.

The title track, written by Jeremy Stover, Ben Hayslip and Rhett Akins is, while mellow and melodic, bland and forgettable, while ‘Guys And Girls’ lacks both melody and lyrical depth and ‘Yup’ is both boring and cliche’d.

This record is not offensive to listen to – it’s just rather bland and wanting lyrically, with just a few bright spots.

2 responses to “Album Review: Easton Corbin -‘About To Get Real’”