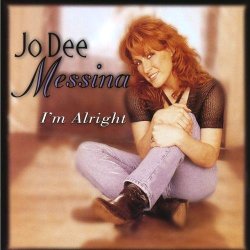 Although Jo Dee Messina enjoyed some initial success with “Heads Carolina, Tails California”, her career did not really take off until the release of her sophomore set in 1998. Coming on the heels of two failed singles, producers Byron Gallimore and Tim McGraw took a play-it-safe approach when choosing material for I’m Alright, an album that is heavy on radio-friendly material. The strategy paid off: the album spawned five hit singles, the first three of which went to #1. The first, “Bye Bye”, written by Rory Michael Bourke and Phil Vassar, is an energetic uptempo number — slightly reminiscent of “Heads Carolina” — at which Jo Dee excels. It was followed by another uptempo ear worm — “I’m Alright”, another Vassar composition which is my favorite Jo Dee Messina song. Jo Dee proved that she was equally adept at singing ballads when “Stand Beside Me” became her third #1.

“A Lesson In Leavin'”, written by Randy Goodrum and Brent Maher had previously been a hit for another redhead when Dottie West took it to #1 in 1980, scoring her first chart topper as a solo artist rather late in her career. Jo Dee’s version, which is faithful to the original, just missed topping the charts,leveling off at #2. She does a good job at interpreting a song that was deserving of being introduced to a new audience. Another ballad, “Because You Love Me”, written by Kostas and John Scott Sherrill, was the album’s fifth and final single, peaking at #8.

As far as the rest of the album is concerned, I really enjoyed the ballad “Even God Must Get The Blues”, which laments the state of the world. It’s the album’s most serious number, and while it was probably not sufficiently commercial to be considered for single release, it is effective in delivering its message and is very well done. I also enjoyed Jo Dee’s version of “I Know A Heartache”, a remake of Jennifer Warnes’ 1979 hits. Warnes was not primarily known as a country artist but her original version did reach #10 on the country charts, as well as #19 on the Billboard Hot 100. There are also a couple of misses, namely “Silver Thunderbird”, with its dated production and pedestrian lyrics and “No Time For Tears” which is forgettable filler.

I enjoyed the radio hits from this album when they were on the charts, though I considered them to be mostly lightweight ear candy at the time. Today I’d be thrilled to hear anything half this good on the radio. I’m Alright is not a great album, but it is a very good one. If you are only going to own one Jo Dee Messina album, this is the one to have.