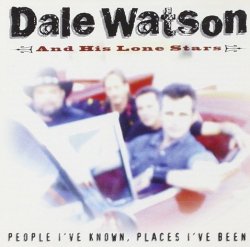 If you’re a fan of bro-country or most of what can be heard on country radio today, then Dale Watson’s People I’ve Known, Places I’ve Been is not the album for you. It was released in 1999 and even then it stood in stark contrast to the increasingly pop-oriented country music of the day. While technically it should be classified as Texas music, a subgenre that fans in the Lone Star State have long contended is distinct and separate from anything produced in Nashville, it has a lot of Bakersfield influences and at times Watson sounds a lot like a young Merle Haggard.

This is the first Dale Watson album on which his band The Lone Stars receive equal billing and it isn’t difficult to understand why. Much of what makes the album work is the excellent musicianship: from the Buck Owens-style Telecaster to the fiddle and pedal steel that are featured prominently throughout the album. It could be argued that this is a concept album, but only in the loosest sense of the term. The songs all stand on their own, but they are all about places that the songs’ protagonist has visited and the people he has encountered there, from local characters such as the owner of the local liquor store and a shoeshine man, to a prison guard and honky-tonk musicians.

These are mostly Texas dancehall numbers; all of them are extremely well done and will appeal to hardcore country fans, but they to tend to blend together a bit. Nothing is particularly memorable, with two exceptions: “Luther” and “From England To Texas”. The former is a tribute to Luther Monroe Perkins who was a member of Johnny Cash’s band The Tennessee Three and credited with helping Cash develop his “boom-chicka-boom” sound. Perkins was a well known figure in rockabilly music in the 1950s and 1960s and died at the age of 40 in 1968 when he fell asleep while holding a lit cigarette.

“From England To Texas” stands out because it a rare ballad among the up-and-mid-tempo numbers that dominate this album, and because of the difference in setting. It finds Watson sitting in a lonely London hotel room and everything about his surroundings, despite being very different from Texas, reminds him of home. I’m also willing bet that it is one of a very few country music songs to namecheck the late Diana, Princess of Wales. It’s very well written and another example of Watson channeling Merle Haggard.

People I’ve Known, Places I’ve Been, is a thoroughly enjoyable, if not particularly memorable album and recommended for anyone who enjoys authentic country music.