Leave a comment Posted by Jonathan Pappalardo on May 18, 2015 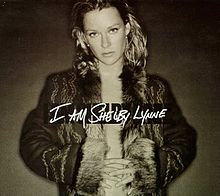 In 1998, Shelby Lynne moved to Palm Spring, California to work with producer Bill Bottrell on her seventh studio album. A year later the results of those sessions emerged as I Am Shelby Lynne. The project remains her magnum opus, a singular work that cathartically unleashed her wild abandon and announced her arrival as a fully-formed artist who finally found her own identity.

Lynne unleashed the heavily produced 60s throwback “Your Lies” as the project’s lead single, with crashing drums and drenching strings startling the listener awake. The slow-burning “Leavin,” in which she recites the verses in a sexy whisper, came next. The final single found her embracing radio-friendly pop, with hints of Bonnie Raitt in her vocal performance. “Gotta Get Back” was justly rewarded and became the project’s only sizeable hit, peaking at #26 on the Hot AC chart.

The three singles, all of which are uniquely excellent, couldn’t be more different yet sonically cohesive enough to work as small pieces of the larger puzzle that is I Am Shelby Lynne. Of even greater significance, “Your Lies” and “Leavin,” open the album hitting the listener with an adventurous sonic sucker punch that takes us on a unique and joyous journey to parts unknown.

That unfamiliar territory led south to Hollywood, where the producers of Bridget Jones’ Diary plucked the ethereal ballad “Dreamsome” for use in the film. It’s an ambiguous selection for an otherwise upbeat romantic comedy, but it works splendidly as a stand-alone recording.

Lynne had a hand in co-writing each of the tracks on I Am Shelby Lynne, including eight with Bottrell. The pair cover vast lyrical acreage, from the esoteric stream-of-consciousness of “Life Is Bad” to the emotional confrontation of “Thought It Would Be Easier.” She subtly addresses her new direction on “Where I’m From,” declaring “never far away from Alabama frame of mind.”

“Why Can’t You Be” is a contextually vague thumper that works from the prospective of Lynne lamenting the end of a romantic relationship, but evolves into brilliance if she’s actually singing about herself, painting the picture that it’s her who’s “the only enemy.” “Lookin’ Up” foreshadows the journey to come, offering sonic glimpses into such projects as Just A Little Lovin’ and I Can’t Imagine. The lyric itself seeps with delicious venom and finds Lynne on the warpath for “the next thing that brings me down.” The original edition of I Am Shelby Lynne closes with “Black Light Blue,” a too-slow string drenched ballad that continues Lynne’s penchant for esoteric stream-of-consciousness songwriting.

To commemorate the album’s fifteenth anniversary, Rounder Records released a deluxe edition complete with six previously unreleased songs and a concert DVD. The six unearthed tunes including a seven minute acoustic ballad entitled “The Sky Is Purple,” in which Lynne addresses her teenage years through a revelatory vocal performance. “Should’ve Been Better” is a pep infused slice of funk, “Wind” is gorgeous pop ballad, and “She Knows Where She Goes” is melodically country. “Miss You Sissy” and “Bless The Fool” lean smooth jazz.

The relationship between Lynne and Bottrell, who also helmed Sheryl Crow’s Tuesday Night Music Club, recalls Emmylou Harris’ reinvention with Daniel Lanois on Wrecking Ball. Like Harris’ seminal classic, I Am Shelby Lynne is a masterpiece that showcases Lynne in her most unbridled form. She richly deserved the Best New Artist Grammy Award she won courtesy of this project, even though, after six previous albums, she logically shouldn’t have been eligible at all.

Lynne hasn’t reached these heights since, but she also hasn’t tried, which is the mark of an astute artist. I Am Shelby Lynne is the rare album that stands in a class by itself where no other project by its maker can even come close to surpassing its brilliance. I Am Shelby Lynne is an ageless beauty.