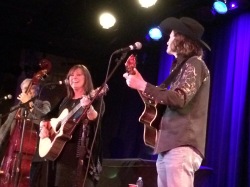 Towards the end of her majestic set at the Center For The Arts (TCAN) in Natick, MA April 16, Suzy Bogguss declared her Midwestern roots have led to a life of running, always heading somewhere. It’s been a subtle thematic presence in her music since the beginning, only growing stronger the more fully realized her catalog becomes.

Flying by the seam of her skirt, Bogguss and her band mates (which included Charlie Chadwick on upright bass) let inspiration guide the evening and erase the fourth wall, gifting the audience a rare intimacy. We were as much a part of the show as the trio on stage, proving the essential need to help tiny venues (TCAN, housed in a firehouse built in 1875, has just 270 seats in its performance room) prosper for the sake of feeding hungry souls craving the authenticity of genuine performers singing and playing real music.

Bogguss ran through her hits, opening with the one-two-punch of “Outbound Plane” and “Aces,” the latter of which she admits is so open to interpretation she doesn’t try and explain its meaning anymore. She gave an all-to-brief shout out to her friend and co-writer Matraca Berg before “Hey Cinderella” and spiritedly performed “Drive South.”

She spent the majority of the evening reflecting on Merle Haggard and Garrison Keillor, the separate inspirations behind her two most recent projects. It was those Haggard and folk tunes that stole the show, from the angelic “Today I Started Loving You Again” to the playfully wordy “Froggy Went A ‘Courtin.'” Bogguss stunned with “Shenandoah” and turned in a masterful rendition of “Wayfaring Stranger.”

She referenced hallowed company before “I Always Get Lucky With You,” which had George Jones covering Haggard before he then recorded the ballad himself. When talking about Haggard, she reminisced about wanting to return to country, looking for a Haggard song to include on the album and choosing to end up with a whole record of his songs.

Bogguss grew emotional talking about her 20-year-old son Ben, a college sophomore, and the empty nest he left behind. She celebrated the highs of reconnecting with her husband Doug through her tantalizing version of “Let’s Chase Each Other ‘Round The Room” and the lows with her own “Letting Go,” one of the greatest off-to-adulthood songs in country music history.

“The Night Rider’s Lament” kicked off a detour into her penchant for Western themed songs and displayed how much she’s grown as a storyteller since first recording that track twenty-five years ago. “Someday Soon” fit in nicely, too, with Bogguss encouraging the audience to sing along. Bogguss opened the encore yodeling away on “I Want to be a Cowboy’s Sweetheart,” a 90 year old tune that sounds as at home in her hands as it did when Patsy Montana took it up the charts in the 1930s.

Bogguss and her band relied on the power of their voices for “Red River Valley,” coming off their microphones to give an already intimate performance another level of closeness between singer and audience. She came full circle with the theme of escape through Haggard’s “The Running Kind” and confessed she isn’t confrontational; she just wants people to like her.

If anything, Suzy Bogguss doesn’t have to worry about being liked. She’s easily one of the warmest artists I’ve ever seen live, a homey presence on and off the stage. By leading with her heart, she rewards her audiences with a transparency that once defined the essence of a country singer. She’s a mother and a wife who just so happens to spend her life making records and singing live. She shares her emotions and leaves us feeling like we’re friends gathering in a coffee shop to catch up. In addition, she’s genuinely grateful whenever someone comes through the meet-and-greet line with a bunch of her records to sign.

As if that isn’t enough, what makes Bogguss truly special is her innate ability to separate from the big machine and create passion projects that allow her to further the legacy she’s been cultivating since the beginning. That enthusiasm for her work allowed her to effortlessly glide between the Merle Haggard Songbook, timeless folk tunes, the Wild West and distinct nods to her hit making heyday with confident ease and sophistication. Bogguss may be a woman on the run, but she’s found a home at every pit stop along the way.