Single Review: Jana Kramer – ‘I Got The Boy’ 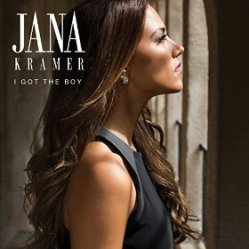 I was thoroughly underwhelmed by actress Jana Kramer’s first foray into country music. But her latest single is much more like it.

While she isn’t the greatest of vocalists, she is perfectly adequate on this understated song, which she delivers convincingly with a throaty almost bluesy quality which reminds me a little of Julie Roberts or the early work of Faith Hill. The emotion of the song rings true. The tasteful production (thanks to Scott Hendricks) is as understated as the song is simply yet perfectly constructed (with the exception of slightly awkward scansion in the first verse).

On the surface about memories and a past relationship, this is really all about the experience of growing up. The protagonist reflects on a long-past, perhaps long-forgotten teenage romance when she sees the man he has grown into. There are no regrets or sense of loss for what has passed, as she compares the affectionate memories she has with the other woman’s present day experiences.

It may be stretching the songwriters’ intentions a bit far to lay too much stress on this aspect, but it is interesting as part of the possible backlash against bro-country with its extended male adolescence, to see the comparison here between the young man as a teenage boy in a baseball cap, as so often sported by today’s male country stars well into their 30s (including Jana’s former fiance the dreadful Brantley Gilbert), and driving the ubiquitous pickup truck. The man in this song has laid these things aside as he grows up and commits to marriage. Can this be a complete coincidence?

The song was written by established songwriters Connie Harrington and Tim Nichols with Jamie Lynn Spears, another aspiring artist with an acting background. I really like both song and performance, and would be thrilled to see it do well. Of course it has several strikes against it as far as country radio is concerned – it’s sung by a woman, and one who is talking as an adult; it’s not loud or a party anthem, but the kind of song about real life which used to be at the heart of the genre; and it’s good. I hope it can beat those odds.

Listen to it here.

One response to “Single Review: Jana Kramer – ‘I Got The Boy’”