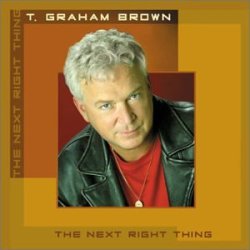 The second album of the post-major label phase of T. Graham Brown’s career was 2003’s The Next Right Thing, which he co-produced with Gary Nicolson. It was released five years after Wine Into Water, and puts less emphasis on soul and R&B and more on mainstream country than his hits for Capitol.

The album’s only single was a remake of Jerry Lee Lewis’s 1977 hit “Middle Age Crazy”, which was written by Sonny Throckmorton. Brown’s faithful-to-the-original version reached #58 on the charts. It may have been the only single released from the album but it is far from the only quality track. The album’s highlight is “Bag of Bones” about an aging war veteran, featuring a guest vocal by George Jones, who sings from the point of view of the song’s subject. These aren’t two artists one would immediately think to pair together, but it is an effective and inspired partnership. The Celtic-flavored “Tools for the Soul”, Steve Earle’s “My Old Friend the Blues” and “Which Way To Pray”, a Brown/Nicholson composition about a survivor of incest are also quite good.

This album is quite different from the music Brown made during his hit-making days, which may slightly disappoint his fans from that era. The rockabilly number “Still Out of the Woods” written by Jim Lauderdale and Gary Nicholson is a little closer to Brown’s major-label releases, and “Use The Blues” and the self-penned “Monkey”, which I did not like at all, has him reclaiming that R&B edge that is lacking from most of these tracks. Throughout much of the album, his voice sounds familiar, but if one didn’t already know who was singing, it might be difficult to identify him. A lot of the time he sounds surprisingly similar to Travis Tritt. That’s not a complaint because overall I quite enjoyed this album. It’s too bad he didn’t more of this type of music when he still had a shot at getting radio airplay.

The album concludes with “Wine Into Water”, the title track of Brown’s previous album, a (semi) autobiographical number about a recovering alcoholic still struggling to overcome his addiction.

Cheap copies of The Next Right Thing are readily available and worth obtaining.

One response to “Album Review: T. Graham Brown – ‘The Next Right Thing’”