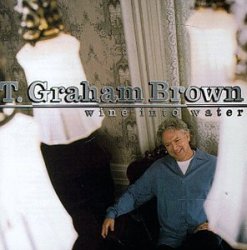 Brown had fought a longstanding battle with alcohol, and this intensified after he lost his deal with Capitol. Having overcome it with the support of his wife Sheila, he returned to music in 1998 with the independent Wine Into Water, co-produced by his old friend Gary Nicholson.

The title track is stunning, perhaps the best thing Brown has ever cut, and drawing deeply on his own experiences. It is a moving plea from an alcoholic struggling with his compulsions, and begging God for help one last time:

Tonight I’m as low as any man can go
I’m down and I can’t fall much farther
Once upon a time you turned the water into wine
Now on my knees I’m turning to you Father
Could you help me turn the wine back into water?

The song was a big success o the Christian country charts, but the lack of major label muscle stopped it from repeating the feat on mainstream radio.

Almost as good is the melancholic ‘Keep Me From Blowing Away’, a wonderful Paul Craft song once recorded by Linda Ronstadt and also by Willie Nelson. Brown’s version features Marty Stuart on mandolin and showcases his own emotional vocals.

Nothing else is quite as good, but I enjoyed ‘Happy Ever After’ (a non-charting single for Gail Davies in 1990). Brown’s version is beefier, both in terms of the production and his vocals, but the latter give it a real emotional heft, focussing on the slog of building a love into a life together. I also liked the rockabilly piano-led ‘Hide And Seek’ and the soulful ‘Accept My Love’. ‘A Better Word For Love’ is a jazzy loungy ballad which makes an interesting change of pace.

‘Good Days, Bad Days’ is a bit dull. ‘Never In A Million Tears’ is very powerfully sung but an average song. ‘How Do You Know’ is a black gospel tune which is also well done.

The funky and partly spoken ‘Memphis Women And Chicken’ comes across as self-indulgent to me, but will appeal to those who like that style. The shouty ‘Livin’ On doesn’t do anything for me either.

This album contains two great tracks, and a number of good ones, and is Brown’s usual mixture of stylings.