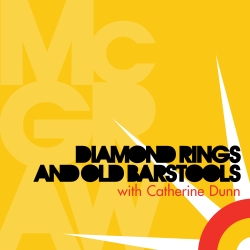 One thing is certain about Tim McGraw. From the inception of his career twenty-two years ago, he’s had to fight his way through a cloud of exaggerated self-parody to prove he’s a substantive artist with enough credibility to be taken seriously. He hit his creative peak at the turn of the century, before falling off the wagon in the late Oughts. Who could blame a guy for wanting to stay relevant?

This decade has already seen McGraw scream for that relevancy on multiple occasions with helpless pleas drenched in desperation. With it finally out of system, the only thing left for McGraw to do is be himself again. That return to form resulted in an elegant top five followed by a four-week number one. The latter hit was McGraw’s biggest single in ten years.

He now aims to recapture the traditional country market, a risky move, with the four singles from Sundown Heaven Town, “Diamond Rings and Old Barstools.” Yes, ladies and gentlemen, that wail you hear in the background is a steel guitar. The harmony vocal? Well, that’s none other than rising country star Catherine Dunn, who also happens to be McGraw’s cousin.

But it’s 2015, after all. So one cannot get too traditional or they risk clunking to the bottom of the Americana remainder bin. That’s why clunky electric guitars overwhelm the track, sucking out any real enjoyment. It’s also why the much-touted harmony vocal by Dunn is barely audible. Emphasize her too much and she might actually get decent exposure.

Unfortunately those grips are nothing compared to the lyric, which plays on the premise of good versus evil without being clever or excitingly original. The chorus is fantastic, with the story’s main couple finally admitting to themselves they’re not good for each other. It’s just the verses say so little, and are such a waste of opportunity, the whole thing is rendered blah.

I was excited when “Diamond Rings and Old Barstools” was released, as I thought I remembered it being a great song. When reviewing the album, I thought it had too much gruffness to it, a point I still stand by. If the verses were stronger and the whole thing far softer, this could actually be a home run. The bones are there, if you’re willing to dig through the clutter to find them.