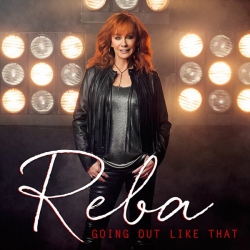 When the announcement was made that Reba McEntire had signed with Scott Borchetta’s Nash Icon label, I ran across an article where she said she thought she’d already made her final album (2010’s The Woman I Am). Brochetta, who’s Valory Music Co. label released that project, had apparently been courting McEntire for years, trying to convince her to return to the studio. The results of that begging should be out this spring.

My hopes are high for the project. Ever since she made her comeback in 2009 I’ve longed for McEntire to revisit the magic of What If  It’s You, her 1996 return to form after years of dabbling in a brand of theatrical country that turned her into a cartoon character. Save a song here and there, that obviously hasn’t happened. If this first taste of the new music is any indication, the long wait continues.

“Going Out Like That” is nothing more than a product aimed at gaining maximum airplay, a business decision where quality is the last thing on everyone’s minds. McEntire and Borchetta have forgone the grand artistic statement in favor of positioning the 60 year old for history making success by playing the mainstream game.

That being said, “Going Out Like That” isn’t without its charms. McEntire has never been one to show her age and with her trademark voice still in top form, that isn’t happening now. And while the indistinctive arrangement, produced by Tony Brown, relies too heavily on layers of electric guitars and sounds as though it was created by a computer, it does have a brightness to it that I kind of enjoy. It also doesn’t hurt that the song feels far more structured than “Turn on the Radio.”

In addition, it’s far from the worst country radio has to offer. Rhett Akins, Ben Hayslip, and Jason Sellers have crafted a lyric that steers clear of positioning McEntire as a ‘female bro’ obsessed with trucks, dirt roads, and drinking. And I still have hope for the album, which will probably have some good songs, as her weakest recordings usually do.

That doesn’t excuse the fact McEntire and Borchetta are banking on emotion manipulation by taking advantage of the fans hoping for the return of substance on their radio. Even worse, the track continues McEntire’s trend of tarnishing her groundbreaking legacy by her refusal to act her age at a time when she should be showing the younger generations how it’s done.

“Going Out Like That” also doesn’t bode well for the Nash Icon brand, which has Martina McBride and Ronnie Dunn on board as well, because it positions the label as a shameless mainstream entity and not the platform for genuine artistic expression everyone hoped it would be.

No matter how you look it, McEntire’s long awaited comeback single is a colossal waste of everyone’s time and energy. I’m so done giving artists a pass when they’ve released a product in place of a song. We’ve been taken advantage of for far too long by an industry’s mainstream sector being more concerned with numbers and profits than artistic integrity. There is a way to meet both objectives simultaneously, but “Going Out Like That” obviously isn’t it.

11 responses to “Single Review: Reba McEntire – ‘Going Out Like That’”