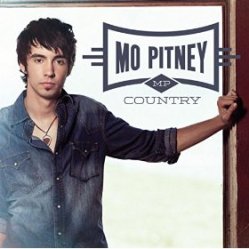 Mo Pitney comes from rural Illinois – not the South, most people’s idea of the breeding ground for a country singer, but one listen to his debut single shows he is the real thing – a genuinely country voice with echoes of Keith Whitley and Randy Travis in his vocal inflections.

The song is very good too, co-written by the young singer-songwriter with veteran Bill Anderson and Bobby Tomberlin. The pleasing melody accompanies a lyric which has potential appeal for country radio’s fondness for self-reference while adding some emotional depth. Exploring the many facets of what “country” really means, from traditional imagery of hunting and river baptisms, to soberly patriotic musings on a soldier who never makes it back home, and of course it shows the universal appeal of country music too:

Tony Brown’s tasteful production is perfect for the song, with steel guitar winding through the song and culminating with a little curl at the end.

This record is what I’ve been looking for from Chris Young and Easton Corbin, mostly in vain – a song worthy of a standard bearer for real country music. I hope this is the start of a stellar career for him. He’s certainly got the talent; Billboard has named him as one of their names to watch for 2015; he’s already appeared at the Opry; and there are some enjoyable live performances on Youtube of some of his other songs. The only down side is that Mo is signed to Curb Records with their dubious track record as a graveyard for fine young artists. But in the meantime, I can rejoice in the unveiling of a great new talent in country music.

Like Loading...
Single Reviews
← Classic Rewind: Barbara Mandrell – ‘I Wish That I Could Fall In Love Today’ Classic Rewind: T Graham Brown – ‘I Tell It Like It Used To Be’ →