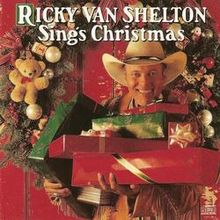 In the wake of his first two albums, Columbia Nashville persuaded Ricky Van Shelton, and his producer Steve Buckingham, to make a holiday album. Ricky Van Shelton Sings Christmas was released in July 1989. It peaked at #32 on the country album’s chart.

The album mixes standard Christmas songs with two covers and a couple of original tunes thrown in. “I’ll Be Home for Christmas” starts the album off string-heavy, with Shelton’s commanding voice cutting through the generic production beautifully. “White Christmas” is more of the same but with flourishes of piano thrown in. “Silver Bells,” one of my favorite Christmas songs, is too slow, suffering from a lack of tempo to make the track even somewhat interesting.

Shelton does a masterful job, though, with “Silent Night.” By forgoing distracting and predictable strings, Buckingham showcases Shelton’s voice with light piano to back him up. The results are incredible, with Shelton conveying the standard perfectly. “Please Come Home for Christmas” shows off Shelton’s bluesy side, but the piano doesn’t work as well and comes off a bit cheesy and dated sounding. “What Child Is This?” just about returns Shelton to the atmospheric heights of “Silent Night” although the former number is just a bit more tastefully constructed.

He turns up the tempo with “Santa Claus is Coming To Town” and the results are very good. The track could’ve been more original sounding, but what it suffers in imagination, it makes up with Shelton’s engaged vocal. His version of Eddy Arnold’s “C-H-R-I-S-T-M-A-S” is close to Arnold’s original as they both have very similar vocal tones. Shelton gives the track a slight uptick in tempo, which keeps the track from being too slow. Willie Nelson wrote the country Christmas standard “Pretty Paper,” which Shelton gives a straight reading complete with steel guitar. Hearing steel on a holiday album always strikes me as odd, but in this context it works perfectly.

Also included are two original numbers, co-written by Don Schlitz and Shelton. “Country Christmas,” a western swing number, seems jarringly out of place on an album dominated by lush string ballads, but it works as a recording on its own. The arrangement makes the lyrics seem silly, but I do love how it sounds. “Christmas Long Ago” is the album’s most organic sounding number, complete with ribbons of dobro.

Listening to the two Shelton co-written tracks, I wish he had gone and created a holiday album in that vein instead of including so many drearily produced standards. The quality of the material is excellent, I just wish it sounded better. Lush string sections on holiday recordings, no matter how prestigious the string section may be, are a cliché. Shelton did release a second holiday album, Blue Christmas, in 2005 that corrected many of the issues I had with this recording. None of this project is inherently bad, it’s just more bland than it needed to be.