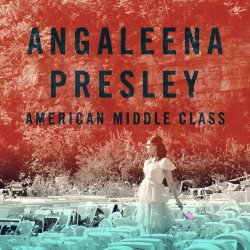 For her solo debut, Pistol Annie Angaleena Presley took the unconventional approach of self-producing the album along with her Husband Jordan Powell. Released earlier this month on Slate Creek Records, American Middle Class is one of the most authentic creations of self-expression you’ll likely hear all year.

Presley, who hails from Beauty, Kentucky, faced an uphill battle in Nashville where she couldn’t get signed to a major label. Then she landed her big break as ‘Holler Annie’ in the trio also consisting of Miranda Lambert and Ashley Monroe. As a songwriter, her “Fastest Girl In Town” was a top 5 hit for Lambert and Ashton Shepherd took her co-write “Look It Up” into the top 20.

I’ve always been a fan of Presley’s direct approach to songwriting, where she refuses to mince words in effort to make a point. Her Pistol Annies cuts have been some of my favorites from the trio, and while she doesn’t have the flashiest vocal tone, it works in her favor here.

Presley, who co-wrote the whole album, composed five of the album’s songs solo. “Ain’t No Man” is a brilliantly biting ballad with stunning turns of phrase while “All I Ever Wanted” sets a religiously confrontational lyric to an ear catching shuffle beat. The mix of Presley’s strong vocal with her prominent background vocalist renders “Pain Pills” too cluttered, distracting the listener from the tale of Jimmy, who’s drowning his sorrows in booze and narcotics in an effort to cope with his life.

Presley is at her best when her storytelling prowess remains the focus of a song, and American Middle Class abounds with prime examples. Her self-penned “Better off Red” is a masterpiece of perception, a beautiful reflection on one’s place in our world. Equally powerful is Lori McKenna co-write “Grocery Store,” three minutes of observations culled from a checkout line. The deceptively simple track is filled with gorgeous articulations of our mundane everyday lives and comes together as a dazzling work of art almost too good to be true.

“Life of the Party” teams Presley with her hero Matraca Berg for another mouth-watering creation, this time the pedal steel soaked story of a woman facing the light of day after a night spent with another man. The pair is an irresistible songwriting force, with Berg turning in a co-write on par with the myriad of classics she churned out in the 1980s and 1990s, a feat in of itself.

On “Drunk” Presley and co-writer Sara Siskind cover identical ground as Presley’s labelmate Brandy Clark did on “Hungover,” and they turn out equally as delicious a tune about unappreciative men and their selfish ways. “Knocked Up,” co-written with Mark D. Sanders, is the prequel to “Drunk,” a banjo driven number about an unplanned pregnancy and shotgun wedding that plays like a delightful dark comedy.

“Dry Country Blues,” which Presley also co-wrote with Sanders, paints the gritty glory of small town life down to the drunk boys out to get laid and their female counterparts trying not to turn into meth whores. The self-penned title track, which covers the same ground, boarders on preachy and falls dangerously close into a pandering flag-waving anthem, but she makes it work by bringing in Patty Loveless for a harmony vocal that gives the track an added texture that works well with the formidable arrangement.

“Blessing and a Curse,” co-written with Bob DiPiero, is one of the more mainstream-leaning lyrics on American Middle Class with a bluesy arrangement that works beautifully with Presley’s voice. Even the electric guitar, which dominates, isn’t a hinder but rather an assist to the track’s overall splendor. Another such track is “Surrender,” the record’s closing number and a co-write with Luke Laird and Barry Dean. The ballad is as lush and exciting as it is assessable, and Presley turns in an elegant vocal.

American Middle Class is easily a highlight of 2014 with Presley’s fine tuned prospective on the world expressed through sharp songwriting and immaculate choices in instrumentation. Her decision to co-produce with her husband has given the album an added authenticity that gives the record an artists’ touch, an obvious missing link in the majority of mainstream music today. Presley, who’s the real deal, has filled my heart with a joy I haven’t felt in a long, long time.