Album Review: Lee Roy Parnell – ‘We All Get Lucky Sometimes’ 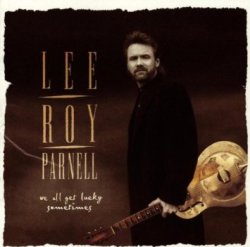 Lee Roy Parnell’s fourth album saw him repeating the pattern of the records which had seen him enjoy commercial success. There was one backroom change, though: a sideways move from Arista proper to the subsidiary imprint Career Records.

The lead single ‘A Little Bit Of You’ is a mid-tempo love song with a radio-friendly tune, written by hitmakers Trey Bruce and Craig Wiseman. It just missed the top spot on the charts, peaking at #2. ‘When A Woman Loves A Man peaked ten spots lower, at #12, but I think it’s a better song. A classy soulful ballad, it features Trisha Yearwood’s backing vocals, although they’re quite low in the mix.

‘Heart’s Desire’ was another big hit, reaching #3. It’s an excellent example of one of Parnell’s slower numbers, rhythmic and blusey but not overwhelmingly so, with a mellow feel. ‘Givin’ Water To A Drownin’ Man’ proved to be Parnell’s last top 20 hit. It’s another strong track in Parnell’s wheelhouse, although the Merle Haggard namedrop seems rather random. The title track also got some airplay but didn’t make the top 40. It’s a mid-to-up-tempo chugger, stronger on groove than substance, but enjoyable enough.

‘Saved By The Grace Of Your Love’ is a gentle ballad written by Parnell with Mike Reid, which is very pretty. ‘I Had To Let It Go’ is a pretty good story song involving losing a loved one and giving up booze.

The Delbert McClinton/Gary Nicholson song ‘Squeeze Me In’ is best known to country fans from Trisha Yearwood’s version. Parnell’s take is okay (and there’s some great piano), but I like Trisha’s better.

‘Knock Yourself Out’ has a blues groove which is quite catchy with call-and-response vocals and is quite enjoyable without being very memorable. It would have worked well live. ‘If The House Is Rockin’ is a straightforward slice of rock ‘n roll with exuberant honky tonk piano.

The album closes out with an instrumental; featuring accordion great Flaco Jiminez. Not my thing, but impressive playing.

Overall, a solid album which should appeal to anyone who likes the singles.

One response to “Album Review: Lee Roy Parnell – ‘We All Get Lucky Sometimes’”