Single Review: Jake Owen – ‘What We Ain’t Got’ 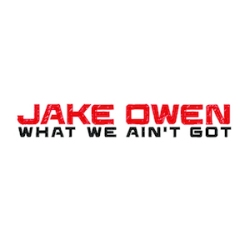 It’s a sad realisation of how the country radio scene has changed in the past few years that now it’s a surprise as well as a pleasure when a new single from an A-list country star turn out to be really good. I quite liked Jake Owen when he started out, but his music took a downturn after the excellent 2007 top 10 ‘Startin’ With Me’. In more recent years his music has completely lost me as he has joined teh bro-country party crowd, although I’ve sometimes had the (hopeful) impression that of all the current stars his heart wasn’t quite in what he was putting out.

His latest single shows he’s more than party songs. The song is written by Travis Meadows and Travis Goff, and is beautifully constructed, with an opening philosophical statement about the universal imagining of greener grass elsewhere. He then brings that understanding to his acceptance that there is no way forward for a failed relationship:

All I want is what I had
I’d trade it all just to get her back
She’s movin’ on but I guess I’m not
Yeah, we all want what we ain’t got

But the song itself is just the foundation. A subtle understated production led by a gentle piano and a vocal which is filled with resigned sadness make the song’s emotions hit home, while never getting exaggerated. This song, and singer, are mature enough never to build up to a crescendo; the protagonist is broken by his loss and sounds broken through to the very end. It is perfectly done.

This single really rekindles my faith in Jake Owen as an artist capable of producing music with substance, even though he didn’t write the song himself.

It’s quite a brave move releasing this song as a radio single in the current climate, and I applaud him and his team for taking that risk. I don’t know how well this third single from his current Days Of Gold album will do for Jake, although it’s already entered the top 40 country chart. I sincerely hope it’s as successful as the far inferior material he has been presenting to the world of recent years. If not, that will be one more strike against country radio. Regardless, it’s well worth seeking out and downloading, and is the finest single from a currently successful mainstream country artist so far this year.