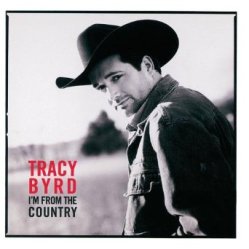 I’m From The Country was Tracy Byrd’s fifth and final album for MCA. Like its predecessor, it was produced by Tony Brown. The album attempted to regain Byrd’s stalled commercial momentum. It succeeded in getting him back into the Top 10 at country radio, but it was his first album not to earn at least gold certification. Although he’d enjoyed a fair amount of success during his tenure at MCA, he hadn’t really broken out from the pack, and the label doesn’t seem to have put a lot of effort into promoting this end-of-contract collection from which only two singles were released.

That being said, the #3-peaking title track is one of Byrd’s best remembered hits. The radio-friendly “I’m From The Country”, written by Marty Brown, Stan Webb and Richard Young of The Kentucky Headhunters is a typical 90s line-dancing style tune but it has aged well. The follow-up single “I Wanna Feel That Way Again” is nice ballad, though more pop-leaning than most of Byrd’s material. It reached #9.

As is often the case, there were some album cuts that hit single potential but were overlooked. The best of them is the up-tempo “Walkin’ the Line”, while “I Still Love the Night Life” — about a man who has settled down to the dismay of his rowdy friends — is a close runner-up. It was written by Kelley Lovelace and Brad Paisley, who was still a year away from making his major label debut. The somewhat pedestrian ballad “On Again, Off Again” is the album’s weakest link, but the remainder of the tracks, while not particularly memorable, are at least solid efforts.

I’ve always thought that Tracy Byrd was a talented vocalist whose material was somewhat inconsistent. I’m From The Country is no exception, but it does have enough very good (though not necessarily great) moments to recommend it.