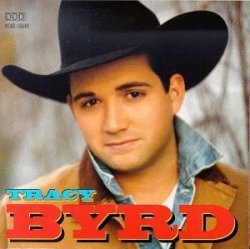 Most of Tracy’s self-titled debut album, released in 1993, was produced by Keith Stegall in solidly neotraditional vein. However when the pleasant but somewhat anonymous initial single, ‘That’s The Thing About A Memory’ failed to make much traction, and he went back into the studio with label head Tony Brown to add three further tracks, which included the next two singles.

A cover of Johnny Paycheck’s hit ’Someone To Give My Love To’ (like the previous effort) showed off his deep voice and underlined his traditionalist credentials, but didn’t quite crack the top 40, and like its predecessor it didn’t really stand out. The big break came with single number three, ‘Holdin’ Heaven’ becoming the artist’s first charte topper. A very commercial rhythmic number with line dance potential it is not particularly memorable now

A fourths ingle, ‘Why Don’t That Telephone Ring’ then flopped just inside the top 40. That’s a shame because it’s an excellent mature ballad about man clinging on to a forlorn hope that his relationship is not over, which is the best of the three singles to my ears.

‘An Out Of Control Raging Fire’ (the third track produced by Tony Brown) is a duet with Dawn Sears, who was another rising star at the time. Both vocalists sing beautifully on the tune (which was later recorded by Patty Loveless with Travis Tritt).

My favorite trick, however, is the fabulous shuffle ‘Hat Trick’, written by Jim Weatherly and Glenn Sutton. The protagonist responds with wry resignation as he gets thrown out by his ex:

I quite liked his cover of the western swing ‘Talk To Me Texas’, although it lacks the character of Keith Whitley’s version. Much the same goes for ‘Back In The Swing Of Things’, which was written by Vern Gosdin, Dean Dillon and Buddy cannon, and which Gosdin later cut himself.

At this stage of his career Tracy had not quite found his own voice as an artist. In particular the regret-filled ‘Why’ and ‘Edge Of A Memory’ are both excellent songs which sound as though Tracy is trying a little too hard to sound like George Strait (one of his big influences).

While this is not an essential purchase, it was a promising debut, and you can find used copies very cheaply. Or just download ‘Hat Trick’.