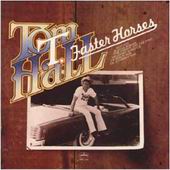 “Faster Horses (The Cowboy and The Poet),” the album’s title track, was the final #1 single of Hall’s career. Hall delivers the excellent story song very well, and I love the jaunty banjo backing up his vocal. The number could’ve done without the horns, though, as they add a cheesy element to the proceedings the track doesn’t benefit from. “Negatory Romance,” a banjo-led bluegrass tune was the second and final single, peaking at #24.

Given the uptempo nature of the album’s two singles, it comes as a surprise that the majority of the tunes on Faster Horses are ballads. He does increase the tempo on “I’m A Cowboy Too,” but it’s a comedy track, just plain silly, and not to my taste at all.

“It’s Got to be Kentucky For Me” is an excellent number in which Hall lists his favorite aspects of Georgia (Magnolia Trees), Texas (Prairie breezes), and Tennessee (the state that built him) only to settle in Kentucky to be closer to his girl. I like the arrangement too, delicate enough to let Hall’s vocal shine through.

“Big Motel on the Mountain” opens with a glorious old-timey piano lick that’s wonderfully ear-catching before evolving into a delightful banjo led number. He infuses the track with striking imagery that makes the listener wish they could travel to the big motel, too.

“No New Friends Please” is a rather murky ballad about a guy out straight with the friends he already has, opting not to invite any more into his life, not even a person he most desires to be friends with. It’s one of the weaker spots on the album and just not that great a song.

Piano once again gives way to banjo on “Little Brown Suitcase,” a number indicative of country music and the type of song that made non-believers hate the genre at the time. It’s actually rather charming and details a lovely story about a family and their relationship to the titular piece of luggage. The track definitely looses its charm on repeated listenings, but it’s a good number nonetheless.

“I’m Forty Now” is a harmonica laced ballad where Hall reflects on turning the milestone age and confesses the dreams that led him to this point in his life, where he now feels like a man. As a track the number is just okay, and comes off a little too schmaltzy for my taste.

“The Songwriter” is an endearing banjo ballad about a fellow who crafts his little compositions until they’re perfect. Hall does a great job both vocally and lyrically of bringing the guy to life.

“It Feels Better Now” is probably the most commercial track on the album, generic enough to appeal to the interests of radio. Hall does a great job of conveying the lyric and the melody is perfectly understated.

“Beer Drinkers Waltz” is everything the title suggests – a jaunty barroom number set in 3/4 time. It stands out on the album for being different and it works because of that distinction alone.

For me, Faster Horses is an underwhelming album for the most part. There wasn’t much here I found to single out as highlights or even found all that memorable. I really wanted to like it, but the dreariness of it all took away any chance of that happening.