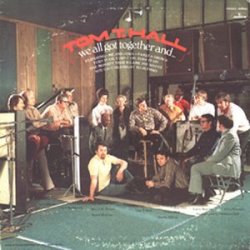 1972’s We All Got Together And … doesn’t contain any of The Storyteller’s most remembered hits but it is a solid collection that ranks among his best. Like its predecessors, it was produced by Jerry Kennedy. All of the songs but one were written by Hall himself. Many of them are story songs, covering topics that range from serious to the ridiculous and occasionally veering into biting social commentary. An example of all of the above is “The Monkey That Became President”, which is as relevant today as it was 40+ years ago. The song pokes fun at politicians — who were held in as much disdain then as they are now — and suggests that a monkey could govern more effectively. Released as one of the album’s two singles, it peaked at #11 and curiously, has been somewhat forgotten. “The Promise and the Dream” similarly expresses concerns about the state of the nation, albeit in a more serious tone. Again, one could be forgiven for thinking that Hall was singing about contemporary times.

Hall tells a number of stories in this collection. “Turn It On, Turn It On, Turn It On” is an unsusual number about a man who, branded a coward after avoiding service in World War II, kills one of his tormentors and is sentenced to death in the electric chair. “Pamela Brown” is a nostalgic tale told from the point of view of a wanderer who wonders what might have been if he had settled down with the girl next door, who apparently didn’t return his affections. “Pratt Street” is not so much a case of you can’t go back home as it is a case of you might not want to, as the narrator revisits the bleak neighborhood of his youth and realizes that he had a lucky escape. Another tale, about the wife of a mentally disturbed man, is reminiscent of “Ruby, Don’t Take Your Love To Town”, because “She Gave Her Heart to Jethro” but satisfied her other needs elsewhere — and apparently, everywhere.

Hall is, of course, best remembered for his story songs, but he shows another side in the ballad “Souvenirs”, which is my favorite track on this album. It’s a bit of a departure for him, but he pulls it off quite well. I also quite liked “Me And Jesus”. Religious songs are generally considered to be less commercially viable than their secular counterparts, but this one managed to scrape into the Top 10, landing at #8. Even so, it’s a bit surprising that it was chosen as a single, from an album that contains many other tunes that were at least equally worthy of being sent to radio.

I must admit that up to now I have been familiar only with Hall’s radio hits, but We All Got Together And … shows that it is well worth digging a little deeper into his catalog. It is available, along with The Storyteller, on a 2-for-1 CD.