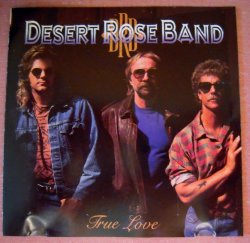 After just three albums, the band released a Greatest Hits compilations (A Dozen Roses). Alongside the hits were a couple of new songs, minor hit ‘Will This Be The Day’ and the less successful ‘Come A Little Closer’. Changes were on the way. Steel guitarist Jay Dee Maness left in 1990, replaced by former Buckaroo Tom Brumley, while Tony Brown took up the producer’s role for the groups’s fourth studio album. The result was a mellower, more low key album than their first three, but although its pleasures are more subtle than the joyful country rock of their commercial heyday, this is a fine album.

Neither of the two singles selected did well. The first of them ‘You Can Go Home’ (written by Hillman with Jack Tempchin, best known for writing the Eagles’ ‘Peaceful Easy Feeling’), is actually an excellent song about the impossibility of going back again to a former life. ‘Twilight Is Gone’ (one of four songs written with Steve Hill) is also good, a reflective mid-tempo song about loneliness and regret over a failed relationship. It may have been too low key for radio play.

The title track (another of Hill’s co-writes) is a warmhearted celebration of love. The urgent ‘Glory And Power’ is about the central importance of love in one’s life, in the context of a man who finds it hard to communicate his feelings. ‘Shades Of Blue’ is a tasteful ballad.

The best of the other songs is the pretty ‘Undying Love’, the only non-Hillman tune (it was written by Peter Rowan), which is a duet with Alison Krauss. Krauss’s angelic tones work well responding to, and harmonising with Chris. She was not yet well known in country music circles, or perhaps this would have been a single.

The philosophical and optimistic ‘It Takes A Believer’, co-written with Michael Woody, is pleasantly melodic. Woody also co-wrote the more downbeat ‘Behind These Walls’.

Herb Pedersen sang lead on the brisk ‘No One Else’, which he wrote with Chris, and which is perhaps the most reminiscent of the band’s earlier work. ‘A Matter Of Time’ has a solid country rock groove although it isn’t that memorable lyrically.

The album lacked the bright tone and sparkle of the group’ s first three albums, and I can see why it slowed down their career. Tony Brown had a reputation as a hitmaking producer, but it may have been a mistake to call on him this time. But the album has a lot to offer the more thoughtful listener.