Leave a comment Posted by Occasional Hope on April 17, 2014 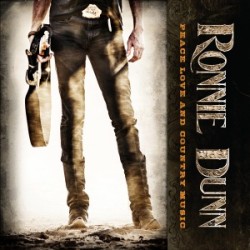 Ronnie Dunn’s solo album for Arista failed to make the waves he and the label had been hoping for, and now the voice of Brooks & Dunn is going it alone in every sense.

Unfortunately, although he is now on his own label, Ronnie is still chasing mainstream success, and seems to think the best way to do this is by copying the over-produced sound popular with younger artists. ‘Kiss You There’ (a failed single last year) is dreadful, but sadly not the worst thing on the album. ‘Cowgirls Rock ‘n Roll’ and ‘Country This’ both suffer from loud and unsubtle rock-laden production with the electric guitars ramped up high, equally unsubtle cliche’d lyrics, and worst of all, unnatural processing of Dunn’s vocals in places. I got a headache listening to them; Ronnie Dunn is a great singer and this treatment does him no favors. ‘Thou Shalt Not’ is in more familiar Brooks & Dunn style territory, but with some bizarre and pointless sound effects added in.

It’s not quite as bad but the production on ‘You Should See You Now’ is too cluttered; the song’s regretful response to an encounter with an ex-lover would sound better stripped back with Dunn’s excellent vocal allowed to shine. ‘Let’s Get The Beer Joint Rockin’’ is typical Brooks & Dunn filler album cut, apart from the spots of vocal processing. A somewhat unsubtle cover of the classic ‘You Don’t Know Me’ is sung with yearning and passion but is influenced by the Ray Charles R&B version rather than country. I was disappointed by this, although some listeners may like it better.

But there are some genuine bright spots here as well. While still a little on the loud side, the current single ‘Grown Damn Man’ recalls the heyday of Brooks & Dunn musically. A confidently delivered mid-tempo song about maturing with age, I enjoyed this track very much indeed. The upbeat ‘Cadillac Bound’ is pretty good too, with its optimism about better times to come. ‘Romeo And Juliet’ is also pretty good despite some odd production choices, with a well-written and convincingly sung plea to rekindle a relationship.

‘Heart Letting Go’ is an understated but emotional ballad with prominent steel guitar and an excellent vocal, which is the best track on the album. Also outstanding is ‘I Wish I Still Smoked Cigarettes’, an excellent single which sadly failed to chart, is a wistful look back at the reckless freedom and innocence of youth. If only there was more like that here.

He covers his bets with ‘They Still Play Country Music In Texas’. It’s more than a little ironic (if not outright hypocrisy) given some of his musical choices on this album that he complains about “mixing heavy metal with twang”. If you ignore that, it’s a decent song which articulates the feelings many older country fans have about mainstream “country” these days. I also liked the earnest title track with its appeal for a return to the good things of the title.

Albums like this are always hard to assign a grade to; how does one balance the great elements against the appalling? But I’m feeling generous, so: