Album Review: Johnny Cash – ‘Out Among The Stars’ 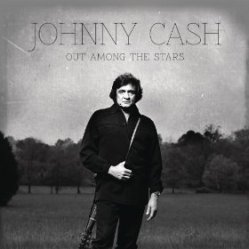 There hasn’t been any shortage of “new” Johnny Cash music in the decade since the Man In Black’s death. But unlike most of those releases, this week’s Out Among The Stars isn’t a reissue, an alternate take, a demo or a recording made during the singer’s declining years when he was long past his vocal peak. Rather, Out Among The Stars is a full-fledged studio album that was mostly recorded in the 1980s and produced by Billy Sherrill. The nearly completed album was discovered two years ago by John Carter Cash, who was in the process of mining the Sony archives while trying to catalog his parents’ extensive discographies. He brought in some additional musicians, including Marty Stuart, Buddy Miller and Carlene Carter, to bring the project to completion. The final product was released last week.

Normally, news of this sort would be cause for great celebration but any excitement about the album had to be tempered with the knowledge that the 1980s were, as even the most die-hard Cash fans will admit , a period in which the singer released mostly less than stellar work. Add to that the fact that Billy Sherrill had been the producer behind “The Chicken In Black”, widely regarded to be one of the worst singles of Cash’s career, and no one was quite sure what to expect.

Considering that Out Among The Stars was mostly recorded in 1984, while Cash’s career was in the middle of a long dry spell and just two years before Columbia dropped him from its roster, it isn’t surprising that the album was forgotten. But those who were braced for the worst will be pleasantly surprised because it is far superior to most of his output from that era. So far the album has produced one non-charting single, “She Used To Love Me a Lot”, which David Allan Coe took to #11 in 1984. It was written by Charles Quillen with Dennis W. Morgan and Kye Fleming. Morgan and Fleming were one of Nashville’s top songwriting teams of the day, having written many hits for Ronnie Milsap, Barbara Mandrell and Sylvia.

Many other top 80s songwriters teams are also represented. Ed and Patsy Bruce contributed “After All”, a pop-tinged ballad that was a departure from Johnny’s usual fare and Paul Kennerley and Graham Lyle wrote “Rock and Roll Shoes”. Johnny himself contributed the sentimental “Call Your Mother” and the inspirational “I Came To Believe”, which was written while Johnny was struggling with addiction and completing a stint at the Betty Ford Center. Bobby Braddock and Curly Putman wrote the tongue-in-cheek “If I Told You Who It Was” about a country music fan who has a fling with a female Opry star after changing her flat tire. No names are named, but the lady’s identity is revealed (for those old enough to recognize it) by an uncredited vocal appearance near the end of the song. It’s not Dolly Parton; that’s all I’m going to say.

Although traditionalists like to claim Cash as one of their own, The Man In Black was no purist and frequently pushed the boundaries of the genre. In this collection he sticks close to his country roots, and unlike many of his records, there is plenty of steel guitar on this album. Among the most traditional tunes are two excellent duets with June Carter Cash — “Baby, Ride Easy” and a cover of Tommy Collins’ “Don’t You Think It’s Come Our Time”. Johnny sounds relaxed and refreshed on these tracks, and June is also in fine vocal form. “Baby, Come Easy” features harmony vocals by Carlene Carter and “Don’t You Think It’s Come Our Time” features some excellent picking by Sam Bush, Jerry Douglas, and Bryan Sutton. Waylon Jennings joins Johnny for a faithful-to-the-original cover of the Hank Snow classic “I’m Movin’ On”. Jennings’ presence elevates a performance that otherwise wouldn’t be particularly memorable.

The album closes with a remixed version of “She Used To Love Me A Lot” that was produced by Elvis Costello. Not surprisingly, this version isn’t country but it is in keeping with some of Cash’s genre-pushing efforts. It doesn’t really add anything to the album, however, and I could have done without it. “I Came To Believe” would have been a more appropriate closing track, but that is the only negative thing I can say about an otherwise exceptional album.

It is unlikely that Out Among The Stars would have fared well commercially had it been released thirty years ago. It was not then and is not now what mainstream Nashville wanted. It won’t produce any big radio hits, but now there is a greater appreciation of Johnny Cash than there was in 1984. Sony is giving the release the promotional effort it deserves and I imagine it will sell quite well.

2 responses to “Album Review: Johnny Cash – ‘Out Among The Stars’”