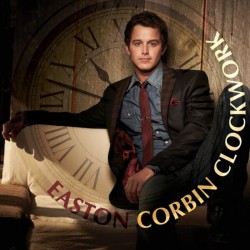 In a format smothered by 80s rock, he’s the one artist given the freedom to retain a sound rich with steel guitars, fiddles, and audible twang. Country radio plays his singles, too, which is a remarkable feat for someone who wears their country credibility openly on their sleeve.

So why is he still recording mediocre inoffensive middle-of-the-road material? Does his record label have his image so tightly controlled he can’t rise to anything great nor fall to the doldrums like his peers?

“Clockwork” retains the same narrative Corbin’s been singing for his past few singles. It’s another guy-girl relationship song with the twist this time around being her punctual arrival at his place every Friday night. The writers inject the word ‘girl’ at the end of almost every line, as if to bro the song up, but it only sounds like a desperate plea to keep Corbin’s music on the radio.

Corbin could be a great country singer if he just had stronger lyrics and far more interesting melodies behind his natural twang. Even he, as evidenced by his relaxed vocal delivery, sounds a bit bored with his chosen material. Corbin does put some feeling into this, but his overall lack of energy prevents “Clockwork” from elevating past mundane.

This pleasing to all vanilla act has gone on too long. Let’s hope his upcoming album shows us what Corbin’s really made of.