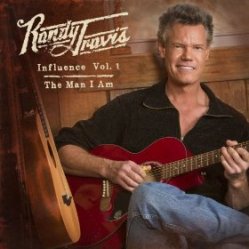 A disappointing 25th anniversary album and the slightly underwhelming single “Tonight I’m Playing Possum”, as well as a general fatigue regarding the endless array of cover albums released in recent years left me feeling indifferent about Randy Travis’ new release Influence, Vol. 1: The Man I Am. In last July’s review of “Tonight I’m Playing Possum”, the only original song on the album, last July, we discussed at length Travis’ diminished vocal abilities, which further lowered my expectations for the full album.

Though the bar was admittedly set low, I was pleasantly surprised when the album was finally released last week. Though most of the songs are not that vocally challenging, I was quite pleased to hear Randy sounding better, for the most part, than he has on most of his recent recordings. Randy mostly avoids some of the obvious standards that have appeared on countless other tribute albums and dusts off some under-appreciated gems. Due to the death of George Jones earlier this year, I expected a number of the Possum’s tunes to be featured. Surprisingly, there is only one, “Why Baby Why”, which leads into “Tonight I’m Playing Possum” which closes the album. Instead, Travis digs deeply into the catalog of Merle Haggard for inspiration. Five of the album’s twelve cover tunes are some of the Hag’s lesser-known numbers, while the remaining songs are remakes of hits by Ernest Tubb, Waylon Jennings, and Lefty Frizzell. In addition, Randy reaches outside the genre for a few numbers: Louis Armstrong’s 1926 jazz hit “Butter and Egg Man” which is given a Western swing arrangement, and “Pennies From Heaven”, a pop standard first introduced by Bing Crosby in 1936. Both of these tunes are creative stretches for Travis, and both are extremely well done, with the Armstrong tune arguably being the best track on the album. Also included is “Trouble In Mind”, a blues standard dating back to 1924, which was later covered by both Haggard and Jones. It is one of the few tracks on the album were Randy’s vocal difficulties are apparent.

Ernest Tubb’s “Thanks a Lot” is given a by-the-numbers faithful-to-the-original treatment, while Travis’ interpretation of Waylon’s “You Asked Me To” is a little short on outlaw attitude. His take on Lefty Frizzell’s “Saginaw, Michigan”, however, is outstanding, though I could have done without the 1960s-style background singers. Randy has always named Lefty as one of his big influences and I would like to hear him sing more from the Frizzell catalog.

It is the Haggard tunes, however, that are the meat and potatoes of this album. If there are any criticisms of Influence, it is that it is a little Haggard-heavy. On the other hand, it’s nice to see Merle finally get his due; every male country singer to emerge during the past twenty years has claimed to have idolized George Jones, while the equally important Haggard usually went unmentioned.

The album opens with “Someday We’ll Look Back”, which Merle took to #2 in 1971. “What Have You Got Planned Tonight Diana” was originally released as the B-side to 1976’s “Cherokee Maiden”. Its lyrics are the deathbed reminiscences of an Alaskan homesteader as he prepares to join his departed wife. It is a beautiful number and is my favorite of the Haggard tunes included here. “Ever-Changing Woman”, written by Dave Kirby and Curly Putman is an obscure album cut mined from 1980’s Back to the Barrooms. It’s surprising that no one ever had a big hit with this song. “My Mary”, which is also quite well done, is from 1983’s Pancho and Lefty. “I’m Always On A Mountain When I Fall” is the the best-known of the Haggard songs included here and like the others, it is a pleasure to listen to.

I’m trying not to read too much into the inclusion of the words “Volume 1” in the album’s title, since I can think of numerous examples where a “Volume 1” was never followed up with any sequels. I do hope that a second set is planned, though that will depend on how quickly Randy recovers from his recent health problems. In the meantime, there is more than enough here to keep his fans happy.