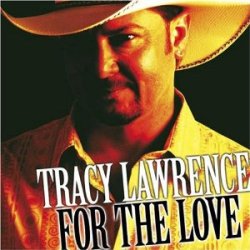 2004’s Strong was Tracy Lawrence’s one and only album for DreamWorks Nashville, which shut down operations in 2005, leaving Tracy and several other artists without a record deal. Two years later Tracy returned with For The Love, released on his own Rocky Comfort Records imprint. Though it was not quite up to the standard of his early work for Atlantic, For The Love was a marked improvement over his more recent releases. He teamed up with a new co-producer, Julian King, although his old friend Flip Anderson shared production credits on a couple of tracks.

The first single “Find Out Who Your Friends Are” was originally released in late 2006, where it struggled to crack the Top 40. An alternate version featuring guest vocals from Tim McGraw and Kenny Chesney was released the following January, and their star power helped to propel the record to #1. It was Lawrence’s first chart-topper since “Time Marches On” reached #1 more than a decade earlier. The record is noteworthy as the slowest-climbing #1 in the history of the Billboard country singles chart. Both the original solo version and the remixed version featuring McGraw and Chesney are included on the album.

Regrettably, Tracy’s chart resurgence was short-lived, as he was unable to come up with a blockbuster follow-up to “Find Out Who Your Friends Are”. The Hallmark-esque ballad “Til I Was A Daddy Too” was released as the second single, only reached #32, and the rather enjoyable don’t-get-above-your-raising tune “You Can’t Hide Redneck” petered out at #56.

The rest of the album is hit-or-miss. The title track is a true dud that is reminsicent of the type of barely-country drivel Kenny Chesney regularly serves up. Brad Arnold of the rock band 3 Doors Down is a guest vocalist. Both the lyrics and Tracy’s voice sound forced on “Just Like Her” and the well-meaning (and also Hallmarky) “As Easy As Our Blessings” is rather dull. For the most part, these songs make up the first half of the album. By the time the fifth track was over, I was really feeling disappointed, but fortunately things improve significantly beginnining with the sixth track, “Speed of Flight” which was written by Tracy and is reminiscent of his early 90s work. The Western swing flavored “You’re Why God Made Me” sounds like something George Strait might have released in the 80s, and along with the Texas dance hall number “Just Like That”, is one of the two best tracks on the album.

A mixed bag overall, For The Love is a better album than I was expecting, marred only by a few mediocre songs. The good songs outnumber the weaker ones, however, so it’s worth the modest cash outlay to get a used copy.