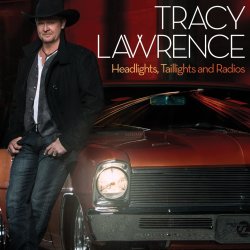 Press releases describe the title of Tracy Lawrence’s latest release as a having a special meaning: “Headlights” referring to the future, “Taillights” referring to the past, and “Radios” referring to his success on country radio. In a number of interviews, Lawrence has stated that he started out to make a traditional country record, but wanted to explore a more edgy and progressive sound, and that the result was a combination of styles meant to appeal to different types of country fans. All of this has left me somewhat confused. I’ve listened to Headlights, Taillights and Radios a number of times throughout the past week and I’ve heard a whole lot of “Headlights” and not a whole lot else.

Headlights, Taillights and Radios is the type of album one usually expects to hear from a major label artist that is just past his commercial peak and hoping to reverse his chart decline. Tracy Lawrence has been releasing his music independently since 2007, and aside from the anomaly that was “Find Out Who Your Friends Are”, has not not had much impact at country radio. At this stage of his career, I would have expected that he was through chasing chart success and ready to make some evergreen records. CMT.com says that the album “brings to mind the material that made him a star in the 1990s” and I certainly can’t argue with that, but comparison is not a favorable one. It just makes things that much more frustrating, because Lawrence started his career making some amazing music and certainly ought to know better.

The album contains two non-charting singles, starting with the annoying “Stop, Drop and Roll” which was released last year and sounds like something that Luke Bryan or Jake Owen would record. “Footprints On The Moon” is much better but still falls far short of what we used to be able to routinely expect from Tracy. “The Other Side of 35” is good lyrically, but is not served well by the generic production or Tracy’s vocal which sounds strangely disconnected and without passion. “Lie” is a decent track in which Tracy makes inquiries about an ex, but finds he is unable to handle the truth that she’s doing OK without him. The closing track “Butterfly”, which Tracy co-wrote with Rick Huckabee and his co-producer Flip Anderson, is enjoyable and far superior to most of the album’s other tracks.

Those are the “headlights”. The only “taillight” (and possible “radio”) songI could identify is the album’s sole standout track “Cecil’s Palace”, a dancehall number that is reminiscent of some of Tracy’s best 90s work. It is also the only track that isn’t almost completely devoid of any country instrumentation. I could have done with a whole lot more of songs like this and a whole lot less of the “edgy” and “progressive” fare.

The remaining tracks are bland filler that bleed together and aren’t worthy of mentioning individually. Headlights, Taillights and Radios is a disappointing effort from an artist who is capable of much better. I recommend downloading “Cecil’s Palace” and perhaps “Lie” and “Butterfly” and giving the rest of the album a miss.