Leave a comment Posted by Occasional Hope on September 3, 2013 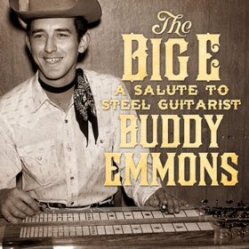 The steel guitar has been an iconic instrument in country music since it was first used in the genre. That doesn’t mean its use has been unchanged; more than almost any other instrument its specification and capabilities have changed with time. a large part of that is down to the legendary Buddy Emmons, one of the most brilliant and innovative musicians ever to be involved in country music, and creators of various new styles of steel guitar.

Emmons is saluted in this fine tribute record. Steel player Steve Fishell, currently touring with Emmylou Harris and Rodney Crowell, produced, and his steel player’s natural understanding for and love of the instrument and the man being paid tribute to help to make this a worthy tribute to one of the giants of country (and not just country) musicianship – Emmons has also been active in jazz. The selected songs are ones where Emmons performed on the classic recording; some of them he wrote. The steel playing, courtesy of a dozen or so of today’s most accomplished steel players, is gorgeous throughout (although it doesn’t feature on every track), and the record recommends itself to a wider audience by the use of some starry guest vocalists on most tracks. A couple of great non-steel guitarists contribute too (Duane Eddy and Albert Lee).

A brace of instrumentals place the instrument center stage, but good though they are, it is the vocal tracks which non-specialists will gravitate to. Fishell plays on my favorite track, a lovely duet by Emmylou Harris and Rodney Crowell on Gram Parsons’ ‘That’s All It Took’. Emmylou swoops and soars as a counterpoint to Rodney’s more measured vocal as they swap lines.

Also very fine is Willie Nelson on the questioning ‘Are You Sure’, which he wrote with Emmons in the 60s. Nelson belies his age with his usual precise, distinctive phrasing and understated but believable emotional commitment. John Anderson is at his best on ‘Half A Mind’, originally recorded by Ernest Tubb with Emmons. It’s always a pleasure to hear Anderson singing hard country, and this is great, with Buck Reid’s steel backing him up nicely in very traditional style.

Gill and Franklin turn from the Bakersfield sound of their wonderful recent project together to some very retro western swing on ‘Country Boy’ (a 1949 hit for Little Jimmy Dickens, before Emmons joined him, but one he must have played many times).

Raul Malo is ideally suited to a loungy jazzy take on ‘Night Life’, but Chris Stapleton’s take on ‘Feel So Bad’ is a bit too far in the blues direction for my personal taste. Both tracks do, however, help to show the breadth of Emmons’s contributions to music in general.

Veteran Little Jimmy Dickens sounds fairly wrecked vocally on ‘When Your House Is Not A Home’, but then he is over 90 and not in the best of health. His inclusion is a nice touch as he was Emmons’ first major employer in the 1950s, bringing the remarkably talented teenager to Nashville.

The lesser-known Joanie Keller Johnson fails to match the Suzy Bogguss version of cowboy classic ‘Someday Soon’ (Emmons played on the recording by folk singer Judy Collins), although it is quite pleasant, with Keller’s husband Mike Johnson on steel. (Incidentally, as Joanie Keller, the singer has released some attractive independent records.)

A couple of guitarists try singing, with mixed results. I quite enjoyed the folky vocal at the end of ‘Wild Mountain Thyme’ by steel player Greg Leisz, following a long, lyrical steel solo, but British-born Albert Lee (once a member of Emmylou Harris’s Hot Band and writer of Ricky Skaggs’s hit ‘Country Boy’) isn’t much good as a vocalist, and ‘Rainbows All Over Your Blues’ is one track which would have been much better off as a pure instrumental.

This is an excellent tribute to someone worthy of all the acclaim he is given, and it is all the better that (unlike the equally good Hank Cochran tribute from last year) it is released in Emmons’s lifetime. It is also genuinely great music in its own right. I recommend it to all country music fans, especially if you like the steel guitar showcased.